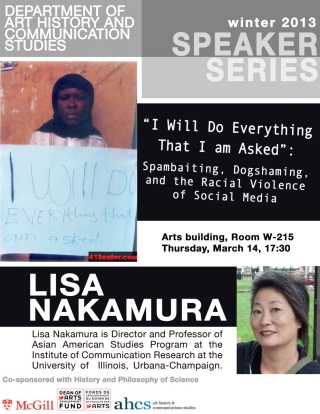 “I Will Do Everything That I am Asked:” Spambaiting, Dogshaming, and the Racial Violence of Social Media”

Abstract: The “trophy room” of 419eater.com, a site with over 48,000 registered members, is full of images of African men and women holding signs penned with demeaning slogans or engaged in ridiculous acts, such as men wearing women’s bras and posing with a fish held near their heads. While some of these are humorous, such as “I can’t believe it’s not butter,” many are designed to render their holder abject, such as “I will do everything that I am asked.”  These images were contributed by "spambaiters," Internet vigilantes who trick would-be Internet scammers as punishment for their crimes. This paper will explore the genealogy, distribution, aesthetics, and visual history of this “shaming” meme across Tumblr, image trophy rooms, and other image and discussion boards. The root of the shaming meme in social media’s visual cultures of racial abjection reminds us of the digital pillory’s hidden history. 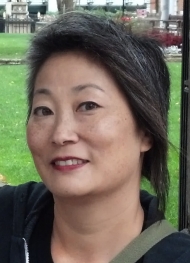 Lisa Nakamura is Director and Professor of Asian American Studies Program at the Institute of Communication Research at the University of Illinois, Urbana-Champaign. http://www.lsa.umich.edu/ac/people/americanculturefaculty/ci.nakamuralisa_ci.detail
Last updated: 03/07/2013 - 14:50
Back to top
McGill University
Copyright © 2021 McGill University
Accessibility Login