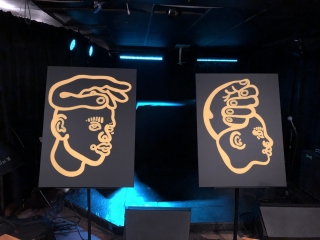 "Beyond the DJ Booth: Electronic Music Scenes and Cultural Production from a Female Perspective"

Abstract: The figure of the DJ – disc-jockey – is central in electronic music scenes. Throughout decades of experimentation and the consolidation of club culture, there has been a low number of women occupying such position, and line-ups in events are still mostly male dominant. Furthermore, whereas literature on female participation in rock n’ roll scenes is already abundant, little has been written about them in the context of electronic dance music – even less so in “Global South” scenarios. Nevertheless, a series of collectives, events and people that address gender inequality in these scenes have risen over the last decade. In her book published in 2012, “Beyond the Dance Floor: Female DJs, Technology and Electronic Dance Music Culture”, Rebekah Farrugia discusses how several women had managed to switch from the position of observers and partygoers to that of professional DJs. Based on recent interviews with female and non-binary DJs from Montreal (Canada) and São Paulo (Brazil), as well as the observation of parties, festivals and other events, I argue that the challenge nowadays is not only reaching the DJ booth – and being respected once they do it –, but also going beyond it, and pursuing multiple roles in their careers, such as that of events’ organizers, music producers, visual artists and entrepreneurs. Apart from the fascination with the numerous talents the research’s participants have, I also seek to question whether there is a higher demand for non-male DJs to work “double” or “triple shifts”.

Bio: Beatriz Polivanov is a tenured professor at the Media and Cultural Studies Department, as well as a permanent professor at the Post-Graduation Program in Communication at Universidade Federal Fluminense (UFF), Rio de Janeiro, Brazil. She is currently a visiting scholar at the Art History and Communication Studies Department at McGill University. She holds a PhD and MA in Communication from UFF. She got her BA degree in Arts (English and Portuguese Languages and Literatures) and a licentiate degree in Education from Universidade Federal do Rio de Janeiro (UFRJ). She is the founder and coordinator of the research group MiDICom (Digital Media, Identity and Communication). Her research interests involve digital culture, self-performance, electronic music scenes and gender relations. She is the author of the book "Identity dynamics in social network sites: a study with participants of electronic music scenes on Facebook" (published in Portuguese, in 2014, based on her PhD thesis). Her work has also appeared in several journals and publications, such as “Brazilian Journal of Communication Sciences” (RBCC); “InTexto” and “The Oxford Research Encyclopedia of Latin American History” (forthcoming).

Abstract: This presentation discusses the poetics of graphic humour in contemporary Brazilian comic strips, with special attention to the way shifts in moral conventions and the reader's horizon of expectations are explored. Issues such as gender, sexuality and identity will be tackled here through an examination of the work of Laerte Coutinho, one of the most relevant Brazilian cartoonists nowadays. The aim here is to address strategies proper to the comics medium, such as the tension between image and text, the use of visual metaphors, and the power of synthesis in the schematic graphic representation of types. This study also covers a short panorama of comic strips produced in recent years in Brazil and investigates how ironic disjunction is explored in short formats, such as editorial cartoons and comic strips.

Bio: Greice Schneider is a tenured professor at the Department of Communications of Universidade Federal de Sergipe (Brazil). She is currently working as a visiting scholar of the Department of Art History at UQAM, doing research about photo narratives in journalism. She holds a PhD in Literature (KULeuven) and a MA in Communication and Contemporary Culture (Universidade Federal da Bahia). Her main interests lie in the field of visual studies, with a particular interest in the relations between image and narrative. She is the author of “What happens when nothing happens: boredom and everyday life in contemporary comics” (Leuven University Press). Her publications have appeared in Studies in Comics, European Comic Art and Scandinavian Journal of Comic Art. She is the leader of the research group Lavint (Laboratório de Análise de Visualidades, Narrativas e Tecnologias) and member of Rede Grafo (Rede Integrada de Pesquisa sobre Teorias e Análise da Fotografia).