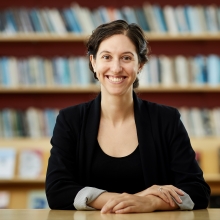 Professor Elissa Berwick joined the Department of Political Science as an Assistant Professor in Fall 2020. She was most recently a post-doctoral fellow at Brown University’s Watson Institute for International and Public Affairs. She obtained her PhD in Political Science from the Massachusetts Institute of Technology in September 2019. Professor Berwick’s interests span the sub-fields of comparative politics and quantitative methodology. Her research focuses on sub-state nationalism, exploring how the imagined communities of stateless nations mold actual political attitudes and behaviors.

As an undergraduate at Yale University, Professor Berwick initially pursued research in astronomy. However, upon realizing that she found her history and political science classes more compelling, she added a political science major and eventually received a B.S. in Physics and Political Science in 2009. After university, she combined these interests by working in Washington D.C. for the House Committee on Science and Technology’s Subcommittee on Space and Aeronautics. She returned to academia via Oxford University, where she received an MPhil in Politics in 2012. Her MPhil thesis compared anti-colonial nationalist movements in Ireland, India, and Egypt.

Professor Berwick continued to pursue her interest in nationalism in her doctoral research, examining sub-state nationalism in Spain and the United Kingdom, where recent referenda on independence in Catalonia and Scotland have so dramatically asserted the sub-state community’s right to decide its own fate. In this endeavor, she brings together analysis from survey experiments, Bayesian scaling models, and text analysis techniques. At MIT, she was also a graduate research fellow with the Political Methodology Lab, and collaborated on building a R package for conjoint survey analysis. Her work has been supported by the Krupp Foundation and Harvard Center for European Studies.