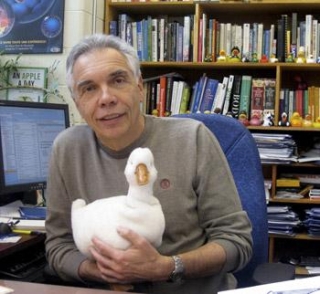 Millions know him simply as “Dr. Joe,” the McGill University chemistry professor who has spent the last 30 years popularizing science, exposing frauds, charlatans and quacks of all stripes, and defending the scientific method with passion, wit and clarity. For the last 15 years, Schwarcz has conducted a lot of his work from the McGill Office of Science and Society in campus quarters lined with several thousand science books and dozens of rubber ducky “quacks” he’s collected.

Schwarcz, 66, also travels widely, is an in-demand public speaker, writes a weekly column for the Montreal Gazette, and hosts a popular radio science call-in show, The Right Chemistry on CJAD radio. His 14th book, Is That a Fact?: Frauds, Quacks, and the Real Science of Everyday Life (ECW Press), is due out this month. All his previous books have been bestsellers in Canada.

All your books seem similar in the sense that they try to bring science to the average person. How is your latest book different?

Mostly, it’s where the emphasis is. The theme is always the same in all my books: how to make science interesting and palatable without trivializing it – a book you can open at any page, and you say, “That’s interesting,” and you keep reading. The entries are relatively short, because what I’ve found over the years, is that people have short attention spans. So they are short pieces with significant information. The challenge is to make it interesting, make it palatable, and still have quality in it in terms of the science. Most of my books have had as a theme, “separating sense and nonsense,” this one probably more than the others. The title kind of gives it away.

You’ve divided the book into several categories, black for scientific non-fact, white for fact and grey for somewhere in-between.

Unfortunately a lot of science actually is grey, because the issues are not iron-clad – there’s always more to be learned. That’s one of the beauties of science: it approaches the finish line but never quite gets there. There are many examples where the science is ongoing and we don’t have the final answers. But we do have final answers in the area of nonsense, what I call “black.” There’s a lot of stuff out there that’s just not debatable, absolute crap. But sometimes the crap can be made to sound very seductive to people.

Do your books preach mostly to the converted?

That’s hard to say. I think it’s really hard to win over the extremists. They have their mindset and never let facts get in the way of their thought process. There’s no point. I suspect most of my readers are random, interested people. It won’t be the naturopaths or homeopaths who read it. But they might pick it up to see what the enemy is saying.

I guess there’s no sense in debating someone religious about the existence of God.

Right. You can talk to them about things that you know you can debate, but not about faith. There’s a big difference between science and faith, and science cannot overcome – and doesn’t even need to try to overcome – faith.

How do you explain scientists who wear kippot?

Just because they wear a kippah or are religious doesn’t mean they don’t follow the science. I would say that there would be very few scientists – certainly Jewish scientists – who believe the Bible literally. There are many, many Jewish scientists who have great faith and believe in God, but they also respect the science and understand that the world, in fact, is billions of years old, and that Adam and Eve might have been a couple of microbes.

How would, say, an observant Jewish anthropologist in Israel reconcile the faith belief that the universe is 6,000 year old with the scientific facts of anthropology?

I have no answer to that, how anyone could reconcile that, how you could throw away all of the evidence. The argument they could make is that when God created the world 6,000 years ago, He also created the fossils that look like they are billions of years old. But there’s that small group who believe that the seven days [of Creation] really meant seven 24-hour days. Most rabbis I have spoken to don’t believe that literally. Faith versus science is not debatable because science is not based on faith. Science is based on evidence. And faith by definition is belief without needing evidence.

You’re a chemist, and the word “chemical” of is often used disparagingly, perceived as an intrinsically negative word.

This is one of my pet peeves and what I emphasize in every single book: that chemicals are not good or bad, just the building blocks of matter, not to be feared, not to be worshipped, but to be understood.

What type of reaction do you get to your columns and books?

It’s 99 per cent positive. It takes me a year to write one book, and in this latest book, I kept the chapters short. You can read it from any point and find it interesting. And a little bit of humour makes the medicine go down. I started my radio show 1980. It is the longest-running radio show on chemistry in the history of the world – as well as the only one.

Why does it seem that, increasingly, you see homeopathic treatments (infinitesimal levels of a supposedly active ingredient “dissolved” into huge quantities of water) being allowed at medical clinics or doctors’ offices?

It’s bizarre, it is absolutely bizarre. It’s kind of that the public has the right to be wrong, and if this is their wish, then there are people who will fulfil it. How anyone with any kind of scientific training can buy into homeopathy is completely beyond me. Most people think homeopathy is “alternative medicine.” It is not. Homeopathy is based on total folly, is scientifically absurd, and there’s no evidence for it except for the placebo effect. That’s not something you should sweep under the carpet when you get a 30 to 40 per cent [placebo] response to an intervention, regardless of what that intervention is. My main objection is that teaching something scientifically absurd is never right, even if there is some positive outcome. The other objection is that it deludes people and sidetracks them from effective treatments. Unfortunately, we have plenty of evidence for that: people diagnosed with some terrible condition, and then they buy into scary literature that all physicians want to do is to burn.

Have you ever been accused of being in the pocket of the pharmaceutical industry and the like?

Yes, it’s happened, but I can’t really afford to pay attention to nonsense. One of the reasons my office is respected and listened to is that we are unbiased and don’t get any funding from anyone. And it’s not in my financial interest to promote or destroy homeopathy. The only allegiance I have is to the scientific method. If it turns out that something is shown to be correct, even something we thought was not so, then fine, we’re ready to embrace it. Often scientists are accused of having blinders on, closed minds, but that it isn’t true at all. It’s just a question of “show me.”

But sometimes you even have “peer review” scientific studies contradicting other peer review studies.

Peer review is our gold standard, but it is not cast in stone… [and it is] not an absolute guarantee against fraudulent activity.

Do you ever feel frustrated in your work?

Sure, it often feels like you’re swimming upriver because there’s a lot of pseudoscience out there, all nonsense.

But are you accomplishing what you have set out to do?

Yes. It’s very clear we can’t win the war against pseudoscience, but we can win the odd battle, and that happens. There’s a large segment of the population who are legitimately interested, who are in the middle but are confused. What the quacks are very good at is presenting their stuff in a pseudoscientific way. They have some lingo that sounds good, that sounds believable.

Do the media contribute to the confusion?

Often you see studies with some data, but not high quality data. Small-scale studies that should be no more than a stepping stone for further studies, but the media will jump on it and report it.

What is your take on genetically modified (GM) food?

The two most misunderstood things are the Israeli-Arab conflict and GM, a bogeyman created with no scientific validity. The activists have done this, and they are just as much into making money as Monsanto is. Monsanto is not the devil. It’s just a company that wants to make money by selling useful products. It’s [to the activists’] advantage to portray it as a villain because that’s what keeps the money coming to them. I’ve seen it over and over again with activists. They want you to clamour to do something, but they don’t want you to actually do it because that’s when they lose their weapon.