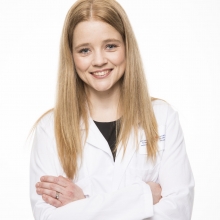 Dr. Geneviève Bernard received her Medical Degree (2002) and Master’s degree in Neurosciences (2003) from Université de Montréal. She completed her residency in Pediatric Neurology at McGill University (2008) and her fellowship in Neurogenetics and Movement Disorders at Université de Montréal (2011) under the supervision of Pr. Bernard Brais, Pr. Guy A Rouleau and Dr. Sylvain Chouinard. She started her career as an independent investigator and pediatric neurologist in October 2011 at the Montreal Children’s Hospital of the McGill University Health Center (MUHC) and MUHC Research Institute. She is the recipient of the Research Scholar Junior 1 salary award from the Fonds de Recherche du Québec en Santé (2012-2016), the Canadian Institute of Health Research New Investigator salary award (2017-2022) and the Research Scholar Senior salary award from the Fonds de Recherche du Québec en Santé (2022-2025). In 2020, she won the Maude Abbott Prize, which recognizes outstanding female faculty at an early career stage who have excelled and demonstrated leadership in education, research or administration. In 2019, Dr. Bernard won the Specialist of the Year Award (region 04) from the Canadian Royal College of Physicians and Surgeons. She is currently an Associate Professor at McGill University, in the Departments of Neurology and Neurosurgery, Pediatrics and Human Genetics and a member of the Division of Medical Genetics at the MUHC. Dr. Bernard and her team, together with her international collaborators, discovered three genes responsible for 4H leukodystrophy, the causal genes for EPRS1-related leukodystrophy and VARS1-related neurodegenerative disease and contributed to the discovery of the causal gene for HEMS (Hypomyelination of Early Myelinating structures). Dr. Bernard published, in collaboration with numerous international collaborators, the largest studies on clinical, radiological and genetic characterization of 4H leukodystrophy. Dr. Bernard published more than 100 peer-reviewed publications, including some in high impact factor journals such as Am J Hum Genet, Ann Neurol, Neurology, and Nat Commun, several book chapters and numerous abstracts. She has presented as an invited speaker in more than 120 provincial, national and international conferences. Dr. Bernard is the Chair of the Scientific Advisory Board of the United Leukodystrophy Foundation, one of the largest foundations of its kind in the world, founded in 1982. She is the first woman, the first Canadian and the youngest individual in this position. Dr. Bernard is a board member of the Pelizaeus-Merzbacher Disease Foundation and the Canadian representative on several international consortia, including the Global Leukodystrophy InitiAtive (GLIA).