RGGJ talk by Margaret Kohn "Why be just? Solidarity and the Problem of Moral Motivation" 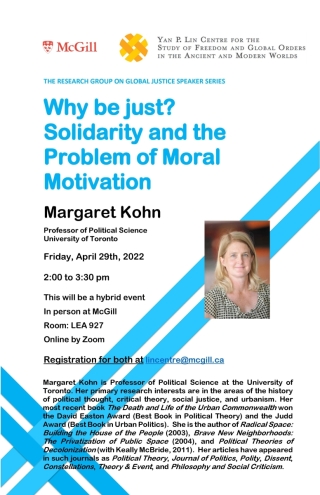 (Professor of Political Science at University of Toronto)

This will be a hybrid event:

In person at McGill

Margaret Kohn is Professor of Political Science at the University of Toronto. Her primary research interests are in the areas of the history of political thought, critical theory, social justice, and urbanism. Her most recent book The Death and Life of the Urban Commonwealth won the David Easton Award (Best Book in Political Theory) and the Judd Award (Best Book in Urban Politics). She is the author of Radical Space: Building the House of the People (2003), Brave New Neighborhoods: The Privatization of Public Space (2004), and Political Theories of Decolonization (with Keally McBride, 2011). Her articles have appeared in such journals as Political Theory, Journal of Politics, Polity, Dissent, Constellations, Theory & Event, and Philosophy and Social Criticism.