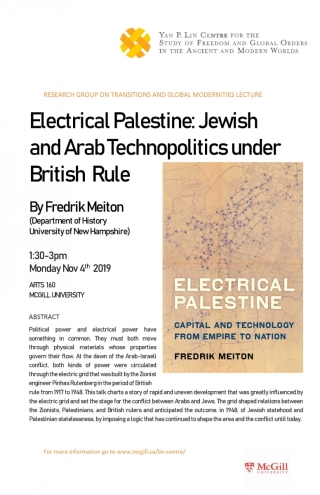 Political power and electrical power have something in common. They must both move through physical materials whose properties govern their flow. At the dawn of the Arab-Israeli conflict, both kinds of power were circulated through the electric grid that was built by the Zionist engineer Pinhas Rutenberg in the period of British rule from 1917 to 1948. This talk charts a story of rapid and uneven development that was greatly influenced by the electric grid and set the stage for the conflict between Arabs and Jews. The grid shaped relations between the Zionists, Palestinians, and British rulers and anticipated the outcome, in 1948, of Jewish statehood and Palestinian statelessness, by imposing a logic that has continued to shape the area and the conflict until today.