“Crowds and Party," a talk by Jodi Dean 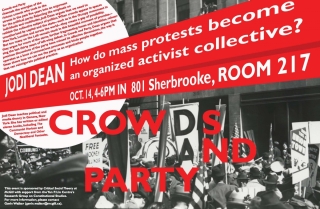 Critical Social Theory at McGill is proud to present a talk by Jodi Dean (Hobart & William Smith Colleges) on her new book Crowds and Party (Verso).

How do mass protests become an organized activist collective?

Crowds and Party channels the energies of the riotous crowds who took to the streets in the past five years into an argument for the political party. Rejecting the emphasis on individuals and multitudes, Jodi Dean argues that we need to rethink the collective subject of politics. When crowds appear in spaces unauthorized by capital and the state—such as in the Occupy movement in New York, London and across the world—they create a gap of possibility. But too many on the Left remain stuck in this beautiful moment of promise—they argue for more of the same, further fragmenting issues and identities, rehearsing the last thirty years of left-wing defeat. In Crowds and Party, Dean argues that previous discussions of the party have missed its affective dimensions, the way it operates as a knot of unconscious processes and binds people together. Dean shows how we can see the party as an organization that can reinvigorate political practice.

This event is sponsored by Critical Social Theory at McGill with support from the Yan P. Lin Centre's Research Group on Constitutional Studies.

Jodi Dean teaches political and media theory in Geneva, New York. She has written or edited eleven books, including "The Communist Horizon and Democracy and Other Neoliberal Fantasies."
Related Links:
Yan P. Lin Centre for the Study of Freedom and Global Orders in the Ancient and Modern Worlds
Research Group on Constitutional Studies
More on Crowds and Party
Last updated: 10/11/2016 - 10:56
Back to top
McGill University
Copyright © 2022 McGill University
Accessibility Log in