A talk by George Ciccariello-Maher on his new book "Building the Commune: Radical Democracy in Venezuela" 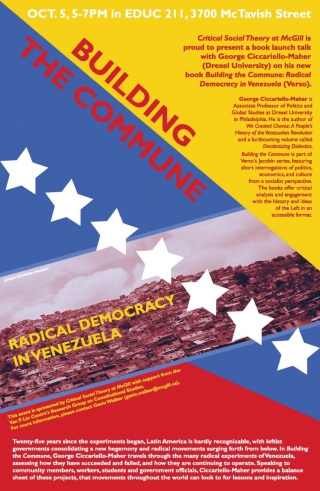 Critical Social Theory at McGill is proud to present a talk by George Ciccariello-Maher (Drexel University) on his new book Building the Commune: Radical Democracy in Venezuela (Verso).

Since 2011, a wave of popular mobilizations has swept the globe, from Occupy to the Arab Spring, 15M in Spain and the uprisings in Greece. Their demands were varied, but what they share is a commitment to ideals of radical democracy, and a willingness to experiment with new forms of organization to achieve this. In fact, the countries of Latin America have been experimenting with such projects since 1989—just as left projects of all stripes fell into decline across Europe—in what was a moment of rebirth. Poor residents of Venezuela’s barrios took history into their own hands in a mass popular rebellion against neoliberalism, much as the movements appearing worldwide are doing today.

Twenty-five years since the experiments began, Latin America is hardly recognizable, with leftist governments consolidating a new hegemony and radical movements surging forth from below. In Building the Commune, George Ciccariello-Maher travels through the many radical experiments of Venezuela, assessing how they have succeeded and failed, and how they are continuing to operate. Speaking to community members, workers, students and government officials, Ciccariello-Maher provides a balance sheet of these projects, that movements throughout the world can look to for lessons and inspiration.

Building the Commune is part of Verso's Jacobin series, featuring short interrogations of politics, economics, and culture from a socialist perspective. The books offer critical analysis and engagement with the history and ideas of the Left in an accessible format.

This event is sponsored by Critical Social Theory at McGill with support from the Yan P. Lin Centre's Research Group on Constitutional Studies.

George Ciccariello-Maher is Associate Professor of Politics and Global Studies at Drexel University in Philadelphia. He is the author of "We Created Chavez: A People’s History of the Venezuelan Revolution," and a forthcoming volume called "Decolonizing Dialectics.”
Related Links:
Yan P. Lin Centre for the Study of Freedom and Global Orders in the Ancient and Modern Worlds
Research Group on Constitutional Studies
More from the Jacobin Series
More on Building the Commune
Last updated: 10/11/2016 - 10:58
Back to top
McGill University
Copyright © 2022 McGill University
Accessibility Log in