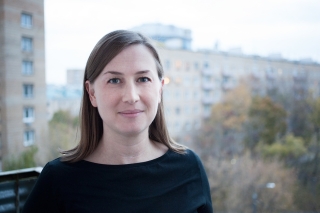 Congratulations to Prof. Kristy Ironside, who was recently been awarded a SSHRC Insight Development Grant and a grant of the Fonds de recherche du Québec - Societé et culture. The grants will help Prof. Ironside to start her new research project International Copyright Law in the Political Economy of Russia and the Soviet Union.

Russia has long been criticized as one of the world’s most notorious international copyright law violators, reprinting and distributing foreign works on a huge scale. Prof. Ironside’s new project helps explain Russia’s fraught relationship to international copyright norms and practices since the late 19th century. The Tsarist, then Soviet, government rejected the Berne convention, the first international agreement on copyright. The Soviet government, in turn, rejected the 1952 Universal Copyright Convention (UCC) until the early 1970s. International copyright law, it argued, was based upon the ‘bourgeois’ notion of intellectual property and thus incompatible with Soviet domestic copyright law, which aimed to facilitate the transmission of important works of literature and culture to the masses. It was also rejected due to the steep costs associated with implementation: the ruble was non-convertible and foreign royalties needed to be paid in hard currency that was earmarked for industrial imports. When it became clear that the Soviet government’s lack of formal legal respect for intellectual property was restricting foreign trade opportunities, the Soviet government finally joined the UCC. Rather than open up trade opportunities, this raised fears in the West that it would abuse international copyright protections to silence its critics abroad. With perestroika, the Soviet government expressed its desire to join the Berne convention in 1989 but collapsed before that could take place; the Russian Federation joined only in 1995. Yet, post-Soviet Russia still does not enthusiastically enforce international copyright protections, and contemporary Russian-language activists have been among the most vocal critics of copyright. This project thus charts changes and continuities in ideas about intellectual property, profit, and rights during Russia’s transition from capitalism to socialism, and from socialism back to capitalism again.