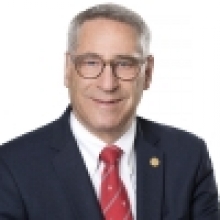 Dr. Gerald Fried is currently Professor of Surgery and Associate Dean for Education Technology & Innovation and is Director of the Steinberg Centre for Simulation and Interactive Learning at McGill University. Previously he served as the Edward W. Archibald Professor and Chairman of the Department of Surgery at McGill and Surgeon-in-Chief of the McGill University Health Centre Network in Montreal, Canada from January 2010-January 2020.

After general surgery residency training at McGill, Dr. Fried did clinical fellowships in gastrointestinal surgery and gastroenterology/GI endoscopy at The Ohio State University, then a research fellowship in gastrointestinal physiology at University of Texas Medical Branch, Galveston. He returned to McGill where he has developed a clinical practice in gastrointestinal surgery, minimally invasive surgery, and surgical endoscopy. He has held three endowed chairs during his career in surgery at McGill: The Steinberg-Bernstein Chair in Minimally Invasive Surgery and Innovation, the Adair Family Chair in Surgical Education, and the Edward W. Archibald Chair in Surgery.

His commitment to education has been recognized with election to the McGill Honour Role for Educational Excellence. Nationally, the Deans of Canadian Medical Schools awarded Dr. Fried the Association of Faculties of Medicine of Canada “John Ruedy Award” for Innovation in Medical Education. He has won multiple teaching awards locally and nationally and has been a leader in Surgical Education activities at the American College of Surgeons, SAGES and other major specialty groups.

In 1990, he established Minimally Invasive Surgery (MIS) as a clinical and academic program at McGill. He and his colleagues have built this into one of the foremost such programs in North America. They have made significant contributions to surgical education, simulation, and the process of introducing innovation into clinical practice. They developed the MISTELS laparoscopic simulator adopted as the manual skills component of the Fundamentals of Laparoscopic Surgery Program, a mandatory requirement for certification in surgery and gynecology in the U.S. Currently, his surgical education research is directed at teaching and evaluating procedural skills, through the use of artificial intelligence powered computervision.

Dr. Fried is a champion of Surgical Innovation through building partnerships between clinicians, engineers, computer scientists and business experts. To this goal he has established a thriving graduate program in Surgical Innovation at McGill and helped to create the CLIP (Clinical Innovation Platform) at the Research Institute of the McGill University Health Centre, where he is Clinical Director.

Dr. Fried has served as President of the Society of American Gastrointestinal and Endoscopic Surgeons (SAGES), the Canadian Association of General Surgeons, the Central Surgical Association, and James IV Association of Surgeons (Canadian Section), and as Chair of the Board of Regents of the American College of Surgeons. In 2011 he was elected to the Canadian Academy of Health Sciences. He has given over 300 invited lectures internationally and published widely on minimally invasive GI surgery and surgical education. In 2019 he was awarded the Meritorious Service Cross by the Governor General of Canada in recognition of his leadership in the development of Minimally Invasive Surgery in Canada.