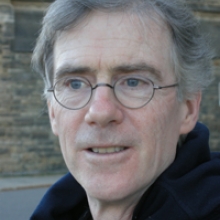 “Beyond Aesthetic Tourism: Travelers and Locals in Sargent’s Self-Reflexive Subject Pictures,” in A Seamless Web: Transatlantic Art in the Nineteenth Century, ed. Marian Wardle and Cheryll L. May (2014)

“Anticipating Aestheticism: The Dynamics of Reading and Reception in Poe,” in Short Story Theories: A Twenty-First-Century Perspective, ed. Viorica Patea (2012)

“Hale’s ‘The Man Without a Country’ and America’s Postwar Crisis of National Belonging,” CRAS (Canadian Review of American Studies) (2012)

“The Image and Its Discontents: Hawthorne, Poe, and the Double Bind of ‘Iconoclash’,” Journal of the Short Story in English 56 (Spring 2011)

Oliver Wendell Holmes and the Culture of Conversation (2001, reprint 2009)

"The Old Order on the Threshold of the Modern: James, Wharton, Adams," in The American Century (1999)

"People Movers: Snow, Pound, Muybridge and the Stop-Action Arts of Consumer Culture," in American Modernism Across the Arts (1999)

"The Art of Being Off-Center": Shopping Center Spaces and Spectacles," Signs of Life in the U.S.A. (1994)

"Opening and Closing the Conversation: Style and Stance from Holmes Senior to Holmes Junior," in The Legacy of Oliver Wendell Holmes, Jr. (1992)

“Selected talks and lectures since fall 2009”

“Speaking the Commonwealth: Oratory and Conversation as Competing Models of Public Life in the America of Emerson, Whitman, and Melville.” Plenary lecture for symposium, “The Humanities and Public Life,” Dawson College, Montreal, March 25, 2010.

“Revising the Role of the Cosmopolitan Woman Traveler: From Daisy Miller to Ellen Olenska.” Paper for panel on “James and the Women,” NEMLA annual conference, Montreal, April 9, 2010.

“Sentimental Nationalism and the Cosmopolitan Patriot: Hale’s ‘The Man Without a Country.’” Paper for annual conference of the ALA (American Literature Ass’n), San Francisco, May 29, 2010.

“The Return of the Repressed: Poe’s Place in the Transatlantic Transmission of Aestheticism,” University of Zurich, Dec. 9, 2010.