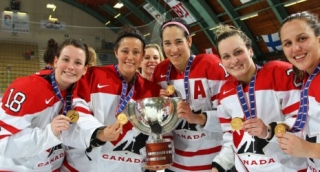 BURLINGTON, Vt. - Two McGill grads have golden medals around their necks, thanks to Caroline Ouellette, who scored her second goal of the game 1:50 into overtime as Canada won the IIHF women's world hockey championship with a 5-4 victory over the U.S. before 4,000 at the University of Vermont's Gutterson Fieldhouse, Saturday.

It was the country's first world title since 2007 in Winnipeg.

Former McGill defenceman Catherine Ward, who helped the Martlets win CIS national titles in 2008 and 2009, was on the ice for three of her team's five markers and was named as Canada's player of the game. The 25-year-old native of TMR, Que., had no points in the contest but finished the tourney with a pair of assists and a plus-4 rating. She graduated with a commerce degree from McGill in 2009.

Martlets netminder Charline Labonte, a native of Boisbriand, Que., who is working on a post-graduate degree in sports psychology after graduating with a physical education degree last year, didn't get into the final game but started in two of Canada's five contests and registered a 1-1 record.

Team captain Hayley Wickenheiser scored short-handed and Canada also got goals from Jayna Hefford and Meghan Agosta, who scored late in regulation to send the final into overtime. The USA had a 44-39 edge in shots as Canadian goaltender Shannon Szabados made 40 saves for the victory.

Defenceman Gigi Marvin scored a pair of goals for the Americans, who also got goals from Kendall Coyne and Brianna Decker. Netminder Molly Schaus registered 34 saves and was saddled with the loss.

The 2013 world championship will be held in Ottawa.