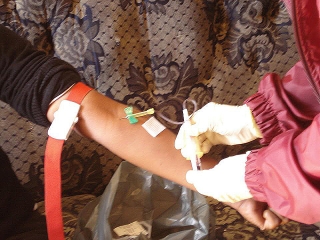 No policy has ever recommended serological (antibody) tests to detect active tuberculosis (TB) yet dozens of these blood tests are currently marketed and sold in developing countries where regulation is weak or non-existent. More than a million of these unapproved tests are carried out every year, usually at a high cost – financial and human – to unsuspecting patients. Mounting evidence clearly shows that the tests do not accurately diagnose TB – they often cause false-positives and false-negatives – and they are not as cost effective as other recommended TB tests.

These findings, summarized in two papers led by McGill University’s Madhukar Pai and published this week in PLoS Medicine, have just led the World Health Organization (WHO) to issue a policy statement strongly advising countries against the use of antibody-based commercial blood tests for the diagnosis of active TB. The “negative policy recommendation” on current commercial TB diagnostics is the first of its kind issued by the WHO.

“While most regulatory bodies have mechanisms in place to withdraw or ban dangerous drugs and vaccines, there is little awareness about the health and economic impacts of inaccurate or suboptimal diagnostics. It is wonderful that the WHO has taken a leadership role in recommending against inaccurate and suboptimal TB tests,” said Dr. Pai, an associate professor at McGill who is also a researcher in the Respiratory, Epidemiology and Clinical Research Unit at the Montreal Chest Institute and the Research Institute of the McGill University Health Centre (RI MUHC).

In the first paper, with Dr. Karen Steingart from the University of Washington School of Public Health in Seattle as first author, the researchers performed a systematic review and meta-analysis of 92 studies evaluating the diagnostic accuracy of commercial serological tests for pulmonary and extra-pulmonary TB (where the infection affects parts of the body other than the lungs) with a focus on the relevance of these tests indeveloping nations. The authors found that serological tests are highly inaccurate and inconsistent and concluded that overall, the quality of evidence regarding the diagnostic accuracy of these tests was very low for both forms of TB.

The second study, conducted by first author Dr. David W. Dowdy from Johns Hopkins University School of Public Health in Baltimore, details a cost-effectiveness analysis of serological testing versus other diagnostic techniques in India. The authors found that if used as an initial TB test among adults in India, serology results in more suffering, premature death, more secondary infections (due to false-negative results) and more false-positive diagnoses than sputum smear microscopy, while increasing per-patient costs to the Indian TB control sector. The analysis also suggests that efforts to increase access to quality-assured microscopy should take priority and thatwhere access and resources are sufficient, microscopy plus automated liquid culture should be used as an additional diagnostic TB test instead of serology.

While great advances have been made in controlling TB over the past decade, misdiagnoses remain a major hurdle for effective control of the global TB epidemic. “Unfortunately, we still do not have an accurate point-of-care (POC) test for TB, as we have for infections like HIV or malaria. The WHO policy strongly encourages future research to develop novel or improved serological tests,” said Dr. Pai.

While the WHO policy against serological TB testing provides much-needed guidance at the global level, the actual implementation of the policy needs to happen in high TB burden countries where these tests are widely used. “We are happy that some countries, like India, have already taken the lead by endorsing the WHO policy and issuing advisories against the use of serological tests,” added Dr. Pai. “The big challenge will be to improve regulation, especially in the private medical sector, and to incentivize private providers to switch to WHO-endorsed TB tests.”

The review/meta-analysis was commissioned by the WHO with funding provided by USAID through a grant administered by UNICEF/UNDP/WORLD Bank/WHO Special Programme for Research and Training in Tropical Diseases (TDR). Work on the cost-effectiveness analysis was funded by the Stop TB Partnership’s New Diagnostics Working Group. Dr. Pai receives funding from the Canadian Institutes of Health Research (CIHR) and Grand Challenges Canada.