Ottawa stuns No. 2-Martlets on anniversary of infamous "Miracle on Ice" game 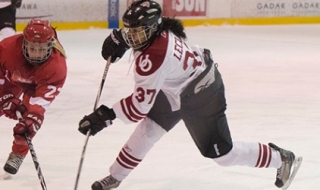 OTTAWA - Elarie Leclair of Varennes, Que., netted a power-play marker at 18:02 of the third period and Dominique Lefebvre of Cantley, Que., added an empty-netter as Ottawa stunned the No.2-ranked McGill Martlets 2-0 in the opener of their RSEQ women's hockey best-of-three semifinal at the uOttawa Minto Sports Complex, Wednesday.

The tumultuous upset snapped Ottawa's 33-game losing streak to McGill dating back to a 2-1 decision for the Gee-Gees in the nation's capital, on Feb. 7, 2007. It also marked the 32nd anniversary of the infamous "Miracle on Ice" game when the Americans upset the Soviet Union 4-3 en route to capturing gold at the 1980 Lake Placid Olympics.

The loss ended McGill's six-year, 21-game win streak in the Quebec conference playoffs, dating back to a 2-1 setback against the Gee-Gees in the league championship series on March 3, 2006.

The Martlets held a lopsided 37-12 advantage in shots, including 14-4 in the opening period and a 16-4 margin in the middle stanza, but were unable to solve netminder Stéphanie Mercier of Smooth Rock Falls, Ont., who registered the shutout.

McGill goaltender Charline Labonté was saddled with the loss, dropping her lifetime post-season record to 27-2.

"We had all kind of chances but couldn't get the puck to the back of the net," said McGill head coach Peter Smith. "We came out strong in the first period but their goalie played well and as the game wore on, we were a little too fancy out there. We've got to keep our game simple and we didn't do that tonight."

McGill went 0-for-4 on the power-play, while Ottawa struck paydirt on their only opportunity.

“We played a solid defensive game tonight, which we have been working on a lot,” said Gee-Gees head coach Yanick Evola. “We shut them down and closed the gaps. You cannot give that team time and space, and we were very good in limiting their chances tonight.”

It was a night for playoff upsets as Windsor also knocked of No.1-ranked Laurier 1-0 in another playoff opener that was eerily similar, with the Golden Hawks holding a 43-17 edge in shots.

The defending national champion Martlets face elimination in Game 2 of the series on Friday night at McConnell Arena on the McGill campus. If a rubber match is needed, it is slated to be played at McGill on Sunday at 2 p.m.