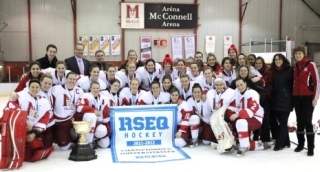 MONTREAL -- Leslie Oles of Beaconsfield, Que., scored a goal and added three helpers as the No.2-ranked McGill women's hockey team skated to a 4-0 conquest over the visiting Montreal Carabins, Friday, to claim the Dr. Ed Enos trophy as RSEQ conference champions for the seventh consecutive season and a lucky 13th time overall since their first title in 1985.

The Martlets, who will depart Tuesday for the CIS championship tournament in Edmonton, swept the best-of-three final series with a pair of 5-1 and 4-0 victories. They also improved their lifetime record against the Carabins to 21-1.

It capped a historic soiree for women's sports at McGill as the basketball team also won the Quebec championship at Love Competition Hall with a 56-49 victory over Concordia and the volleyball squad pulled off a 3-2 upset over Saint Mary's in the quarterfinal round of the CIS championships in Hamilton, Ont. McGill had never before had three women's teams winning a post-season game on the same night.

"We were good and so was U de M and because they played us tough, it made us even better," said head coach Peter Smith, who improved his lifetime record to 326-116-31 overall in 12 seasons behind the McGill bench. "Everybody was going and it was a good team effort. This was our best game of the playoffs, maybe not our most prolific one from an offensive standpoint but it was definite our smartest game. There was lots of energy and we managed the puck really well. We had some games where only about 80 per cent of the team was playing with a sense of urgency but tonight, we had that from the whole team."

Oles, a physical education sophomore, broke a scoreless tie just 51 seconds into the middle period with what proved to be the game-winner. The speedy 5-foot-2 winger then proceed to set up each of the next three goals, by Ann-Sophie Bettez at 12:02 of the second, Mélodie Daoust at 4:36 of the third and Bettez again, who struck pay-dirt on the power-play with just 74 seconds remaining in the contest.

"That line of Jordanna (Peroff), Ann-So (Bettez) and Leslie (Oles) was really going," noted Smith. "Ann-So was just terrific tonight, especially after she wasn't as sharp as she wanted to be in Game 1 of the series. Oles also had so much jump in her step tonight."

Daoust, the conference rookie-of-the year, who won the regular-season scoring crown, also captured the RSEQ playoff scoring title with a 5-6-11 record in five games. She beat out Bettez (5-5-10), the league MVP, by one point.

McGill, which had a 28-20 edge in shots, went 1-for-5 on the power-play and snuffed out all three manpower situations awarded to the Carabins.

Charline Labonté, a fifth-year senior from Boisbriand, Que., kicked aside 20 shots to earn her second shutout in five playoff games this season and her 13th goose-egg in 33 career playoff contests, improving her lifetime record to 31-2 in post-season play.

"Charlie made a couple of real key saves, especially in the second period when we were outshot (13-7)," said Smith. "The last few games she's seemed to have found a renewed focus. She is confident and powerful back there and has such a great presence that brings confidence to the entire team."

MARTLET MURMURS: Among the 296 fans on hand to see the contest at McConnell Arena was Heather Munroe-Blum, principal and vice-chancellor of the University. She circulated throughout the venue, paid a visit to the McGill fight band and made a pit stop in the Martlets dressing room, to address the team during second intermission. She was invited onto the ice for the traditional post-game celebratory team photo with the RSEQ banner. It is believed to be the first time in McGill history that a principal appeared in a varsity team photo.... First-line forward Katia Clément-Heydra, who was injured in Game 3 of the semifinals and is out for the remainder of the season, was collecting autographs outside the Martlet dressing room on her new, lengthy plaster cast, which extends all the way from her left hand to her elbow... Over their five playoff games to date, 17 different Martlets have registered points, including 11 who put the puck in the net... There were many recent Martlet graduates on hand as well, including Vanessa Davidson, Alyssa Cecere, Gillian Merrifield, Lisa Zane, Alessandra Lind-Kenny, Gabrielle Smith, Kalie Townsend, plus twin sisters Alexandra and Vicky Wells, to name but a few... Kim St. Pierre, another former Martlet great who made No. 33 famous with McGill and at the Olympics, was hoping to be there but plans changed when she gave birth to her first child, Liam, an 8.33-pound son who was born on Feb. 28 at 9 p.m.