Musical chills: why they give us thrills 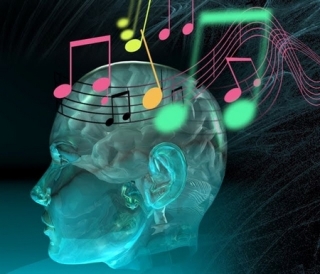 The neuroscience of musical chills

Scientists have found that the pleasurable experience of listening to music releases dopamine, a neurotransmitter in the brain important for more tangible pleasures associated with rewards such as food, drugs and sex. The new study from The Montreal Neurological Institute and Hospital – The Neuro at McGill University also reveals that even the anticipation of pleasurable music induces dopamine release [as is the case with food, drug, and sex cues]. Published in the prestigious journal Nature Neuroscience, the results suggest why music, which has no obvious survival value, is so significant across human society.

The team at The Neuro measured dopamine release in response to music that elicited “chills”, changes in skin conductance, heart rate, breathing, and temperature that were correlated with pleasurability ratings of the music. ‘Chills’ or ‘musical frisson’ is a well established marker of peak emotional responses to music. A novel combination of PET and fMRI brain imaging techniques, revealed that dopamine release is greater for pleasurable versus neutral music, and that levels of release are correlated with the extent of emotional arousal and pleasurability ratings. Dopamine is known to play a pivotal role in establishing and maintaining behavior that is biologically necessary.

“These findings provide neurochemical evidence that intense emotional responses to music involve ancient reward circuitry in the brain,” says Dr. Robert Zatorre, neuroscientist at The Neuro. “To our knowledge, this is the first demonstration that an abstract reward such as music can lead to dopamine release. Abstract rewards are largely cognitive in nature, and this study paves the way for future work to examine non-tangible rewards that humans consider rewarding for complex reasons.”

“Music is unique in the sense that we can measure all reward phases in real-time, as it progresses from baseline neutral to anticipation to peak pleasure all during scanning,” says lead investigator Valorie Salimpoor, a graduate student in the Zatorre lab at The Neuro and McGill psychology program. “It is generally a great challenge to examine dopamine activity during both the anticipation and the consumption phase of a reward. Both phases are captured together online by the PET scanner, which, combined with the temporal specificity of fMRI provides us with a unique assessment of the distinct contributions of each brain region at different time points.”

This innovative study, using a novel combination of imaging techniques, reveals that the anticipation and experience of listening to pleasurable music induces release of dopamine, a neurotransmitter vital for reinforcing behavior that is necessary for survival. The study also showed that two different brain circuits are involved in anticipation and experience, respectively: one linking to cognitive and motor systems, and hence prediction, the other to the limbic system, and hence the emotional part of the brain. These two phases also map onto related concepts in music, such as tension and resolution.

This study was conducted at The Neuro and at the Centre for Interdisciplinary Research in Music, Media, and Technology (CIRMMT). The research was supported by the Canadian Institutes of Health Research, the Natural Science and Engineering Research Council, and the CIRMMT.

Link to music samples used in the study: www.zlab.mcgill.ca/emotion

Link to comprehensive list of ‘chill’ inducing music provided by participants for an earlier study (go to Table S1):