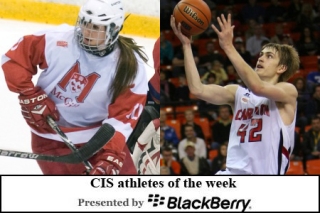 Peroff, a fourth-year world religions major from Keswick, Ont., was named tournament MVP at the CIS championship in Waterloo, Ont., after she helped the top-seeded Martlets capture their third national title in four years. The 5-foot-6 forward set up two goals in a 4-2 win over Alberta last Thursday, tallied the game-winner in a 3-1 victory over Queen's on Saturday, and then scored once and assisted on the winning goal in a 5-2 decision over StFX in Sunday's gold medal final. The 21-year-old, who led all scorers at the championship with five points, was named player of the game in each of the last two contests.

Hinz, a second-year commerce student from Ottawa earned tournament-MVP honours at the CIS Final 8 in Halifax after he led the second-ranked Ravens to their seventh W.P. McGee Trophy triumph in nine years. The 6-foot-6 forward scored a team-high 19 points in a 73-66 quarter-final win over Concordia last Friday, exploded for 32 points in a 95-83 semifinal victory over Saskatchewan on Saturday, and then chipped in with 13 points and six rebounds in an 82-59 domination of Trinity Western's in Sunday's title match. The 19-year-old, who was named the CIS player of the year prior to the tourney, was selected game MVP following Carleton's first two wins of the weekend.

His father starred for the Redmen basketball team from 1980 to 1984, then after earning a commerce degree, he studied at Oxford before returning to McGill for his final year of eligibility in 1986-87.