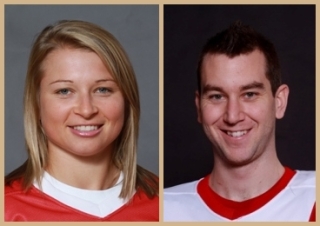 CALGARY - Two student-athletes from McGill University are among eight national finalists announced Wednesday for the 20th Annual BLG Awards gala, established in 1993 to recognize the top female and male athletes from universities affiliated with Canadian Interuniversity Sport. The event is sponsored by the law firm of Borden Ladner Gervais.

McGill hockey players Ann-Sophie Bettez of Sept-Iles, Que., and Marc-André Dorion of St. Hubert, Que., will represent the Réseau du sport étudiant du Québec (RSEQ) at the gala, scheduled for April 30, where each nominee will be honoured, with one female and one male winner receiving a $10,000 post-graduate scholarship in front of more than 1,000 guests at the EPCOR Centre's Jack Singer Concert Hall in Calgary.

McGill leads all CIS institutions with 17 nominees, nine of them women, in 20 years who have earned a conference nomination for the BLG Awards. Among the previous McGill nominees was current Habs left-winger Mathieu Darche, who was a BLG finalist in 2000 and Randy Chevrier (2001), a long-snapper and defensive lineman with the Calgary Stampeders, who also played in the NFL with Dallas and Cincinnati. Two McGill students have won the award, namely Olympic goaltender Kim St. Pierre in 2003 and distance runner Dr. Linda Thyer in 1995.

"We are extremely excited to be hosting the 20th Anniversary of the BLG Awards in Calgary," said Doug Mitchell, national co-chair of BLG. "We continue to be amazed by the talents and accomplishments of these outstanding athletes. Each year, as we follow the past winners and hear about their accomplishments or what they are involved in, we realize how important their university sports background has been to them. We congratulate the universities who have provided the great education and athletic programs for these students to succeed in their careers."

"The BLG Awards is the event we look most forward to all year long," said Marg McGregor, chief executive officer of CIS. "With over 10,000 student-athletes competing in CIS, the BLG Awards highlight eight exceptional individuals and we are extremely proud of their accomplishments and unrelenting pursuit of excellence."

Bettez, a 5-foot-4 forward from Sept-Iles, Que., wrapped up her record-setting university career this winter with the highest individual honour in CIS women's hockey, the Brodrick Trophy presented to the most outstanding player in the country. It was the latest of countless individual and team awards that the two-time conference MVP and scoring leader has received during her five campaigns with the Martlets, including CIS rookie of the year, five selections as a first-team Quebec all-star, five nods as a CIS all-Canadian (three on the first squad), five RSEQ championships and as many appearances at the CIS tournament, including three national titles, one silver and one bronze.

Prior to her arrival on the Montreal downtown campus, the Martlets had never claimed the CIS banner.

When he recruited Bettez out of Dawson College back in 2007, McGill head coach Peter Smith knew he was adding a special player to his roster for the next five seasons. But did he really know she was that good?

"She is a coach's dream -- keeps it simple, plays an uncomplicated style of game and brings a great combination of skill and grit. She is the hardest worker on a team full of hard workers and I hold her work ethic up as the standard for the young players on our team to strive for," says Smith, who served seven years with the national women's program and was an assistant coach on the squad that won Olympic gold in 2010. "Her growth and development as a player, student and person has been incredible."

In her fifth and final CIS season, Bettez, who graduated last year with a bachelor of commerce degree and is currently working towards a public relations diploma, finished second in RSEQ scoring with 37 points in 20 league games before adding 13 points in eight playoff contests. She is McGill's all-time leader in goals (85), assists (87) and points (172) in 91 regular season matches and also owns the team's overall records in all three categories with 148-175-323 in 196 career games.

The 24-year-old has also enjoyed success on the international stage over the years. Back in 2010, she helped the Canadian under-22 squad capture gold at the MLP Nations Cup in Germany after guided the team to a silver-medal finish at the same tourney the previous year. In 2011, she once again triumphed with the Maple Leaf jersey on her back, this time claiming gold with a group of CIS all-stars at the Winter Universiade in Turkey.

"I think it's the dream of every little girl to be on the national team, and I'd definitely like to try to make the big team," she said. "I just have to keep working harder and hopefully they invite you to be part of the national program. I'm definitely going to be playing hockey (next season); whether it's here or somewhere else, still undecided. The future is still to come."

On the men's side, the McGill hockey team has apparently become a farm club for the BLG Awards. Or at least it appears that way, as Dorion's nomination in 2012 marks the third straight year a member of the Redmen is in the running for CIS' highest individual honour, following forwards Francis Verreault-Paul (2010) and Alexandre Picard-Hooper (2011).

We will probably never know if the BLG Awards had anything to do with it, but the talented trio was at the forefront of one of the greatest accomplishments in the storied history of athletics at McGill, in late March at Fredericton. As the CIS University Cup championship was celebrating its 50th anniversary, it seemed only fitting that the Redmen, the oldest hockey team in the world, captured their first-ever national title, in their 136th season, thanks to a thrilling 4-3 overtime win against Western. Following the final, Dorion, Picard-Hooper and Verreault-Paul were all named tournament all-stars, with the latter earning MVP honours.

Hoisting the University Cup was the crowning moment of Dorion's remarkable university career. He signed a pro contract this week to play for EHC Linz, which just claimed the championship of the Erste Bank Eishockey Liga, the top league in Austria.

"Obviously, (winning the CIS title in overtime over Western) was a huge game for the hockey program to finally win the national championship that we've been waiting to do for so long," said Dorion. "And seeing that final goal in overtime was the best moment in my life, that's for sure."

Prior to the CIS national tourney, the 5-foot-11, 185-pound rearguard was voted MVP of the OUA East division, CIS defenceman of year for the second time in three seasons and a first-team all-Canadian for the third straight campaign. Over his four years, the alternate captain and physical education major guided McGill to three conference titles, four trips to the CIS championship and two appearances in the University Cup final. He will graduate as the highest-scoring blueliner in school history with a 38-154-192 record in 174 games overall.

"Marc-André is an elite CIS defenceman who excels at both ends of the ice. He's also an outstanding student and a well-respected leader within our team," says McGill bench boss Kelly Nobes about his team MVP, who made the Principal's Student-athlete Honour Roll and was honoured by the CIS last fall as one of the Top 8 Academic All-Canadians in the country.

In 2011-12, Dorion topped all CIS defencemen with 39 points in 28 league games, a tally that was good enough for seventh place in the CIS scoring race. He became the first rearguard in history to lead the Redmen in scoring. Perhaps his most impressive statistic however was that he was assessed only four penalty minutes during the regular season and had no PIMs in his 10 post-season games, a remarkable accomplishment for a defenceman.

Of course, Dorion's success with the Redmen came as no surprise to hockey observers. After all, the veteran of five QMJHL seasons has received NHL tryouts with Dallas, Phoenix and Toronto over the years.  In 2009, he received the Prix d 'Excellence Guy Lafleur for his outstanding achievement in academics and hockey. Last year, he helped Canada claim bronze at the 2011 world university winter games in Turkey.

Joining Dorion as finalists for the Doug Mitchell Trophy presented to the CIS male athlete of the year are Andrew Clark of Brandon, Man., a hockey player from Acadia University; Kyle Quinlan of South Woodslee, Ont., a football player from McMaster University; and Ben Ball of Abbottsford, B.C., a volleyball player from Trinity Western University.

The BLG Awards are based on athletic accomplishments, outstanding sportsmanship and leadership. Each of the 52 CIS schools selects one female and one male athlete of the year. From these nominees, one female and one male athlete are chosen within each of the four regional associations: Atlantic University Sport (AUS), Réseau du sport étudiant du Québec (RSEQ), Ontario University Athletics (OUA) and Canada West Universities Athletic Association (CWUAA). To be eligible, a student-athlete must have competed in a CIS sport for a minimum of two years and cannot be a previous recipient of a BLG Award.

All nominees receive a commemorative gold ring and winners are presented with a trophy and a $10,000 scholarship to attend a Canadian university graduate school. Winners are selected by the Canadian Athletic Foundation, a not-for-profit board established for the purpose of administering the BLG Awards and protecting the integrity of the selection process. The CAF Board of Trustees consists of 21 members from five Canadian cities representing major corporations from across the country who are committed to ensuring that Canadian university athletes receive the recognition they deserve.

*national recipient of a BLG Award

(see breakdowns by school & sport below)

Number of nominees (number of winners)

Number of schools with at least 1 nominee: 39

Number of schools with at least 1 winner: 20

Number of nominees (number of winners)

* 1 nominee competed in both soccer and track & field

* 1 nominee competed in both soccer and hockey