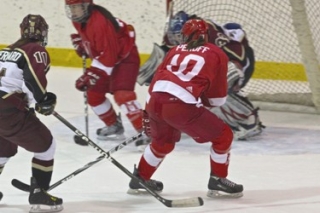 MONTREAL - Emmanuelle Blais registered a hat-trick and added an assist as the Montreal Stars skated to a 4-1 victory over McGill in women's exhibition hockey at McConnell Arena, Wednesday.

The Stars, which currently sit second in the six-team Canadian Women's Hockey League with a 12-3-1 record, feature a lineup composed primarily of former NCAA and CIS players, a number of whom have played with the national team.

The game was arguably the best display of women's hockey at McConnell Arena this season and ranked right up there with McGill's 5-4 shootout win over Laurier on Dec. 30.

It ended on a somber note, however, as McGill captain Cathy Chartrand suffered what appeared to be a significant injury to her left leg with a couple of minutes remaining. She was chasing the puck behind her own net, with former teammate Alyssa Cecere in hot pursuit. Cecere's stick got caught up in Chartrand's skate and the all-Canadian rearguard took an awkward tumble. She was helped off while keeping her left foot off the ice. Chartrand, who did not go to the hospital, will be re-examined on Thursday and her status is considered doubtful for at least the next game.

Blais, a Montreal native who skated for the University of Minnesota-Duluth, set up the opening goal by Meghan Agosta, the Olympic gold medalist from Ruthven, Ont. Agosta scored at 3:47 of the first period, then returned the favour triple-fold, assisting on all three goals by Blais.

Trailing 2-0 late in the middle period, Jordanna Peroff of Keswick, Ont., replied for the Martlets with her seventh of the season on a power-play at 18:52 to spoil netminder Catherine Herron's bid for a shutout against her former team. Blais added an insurance goal at 11:13 of the final period and completed her hat-trick six minutes later.

"There certainly was a good pace to the game," said McGill head coach Peter Smith. "We were only down one goal after the first period and also down a goal after the second. But I liked the way we played over the first two periods and a lot of good things happened. However, we backed off in the third and gave them a little too much time and space. We were really good when we had the puck but struggled when we didn't and that was the difference."

The two teams will hook up once more on Feb. 17 and Martlets will no doubt be circling that date on their calendar when they look to avenge the loss.

McGill, which owns a 19-6-1 record overall, including a 16-1 record against CIS teams, will resume league play on Jan. 22 when third-place Carleton (4-4-3) visits McConnell Arena.

MARTLET MURMURS: The teams held a post-game exhibition shootout, which McGill won 2-0 on goals by Melodie Daoust and Ann-Sophie Bettez... The Montreal Stars roster featured seven former McGill players, including general manager Meg Hewings, who skated for the Martlets in the 1990s... They dressed only 17 players, including just one goaltender... McGill grads in their lineup included Herron, Cecere, Vanessa Davidson, Catherine Ward, Rebecca Martindale and the recently-married Carly Hill... Among the faces in the crowd was McGill grad Kim St-Pierre, the Olympic gold medalist who played for both the Martlets and the Stars... St-Pierre took the year off to have a baby and is expecting to give birth in about five weeks... Also on hand was Dr. Greg Frazer, a dentist who skated for the Redmen from 1976 to 1978... His daughter Abbey is on McGill's recruiting list for next year. She plays for John Abbott College and recently returned from the Czech Republic where she helped Team Canada win a gold medal in the IIHF World Under-18 championship.