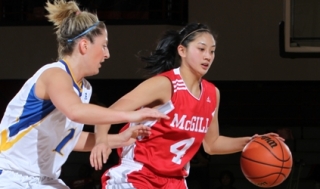 CALGARY - Zara Huntley, a 6-foot-2 post player from Halifax, scored a game-high 18 points and pulled down 11 rebounds as the second-seeded University of British Columbia Thunderbirds defeated No.7-McGill 65-43 in the opening quarter-final game of the CIS women's basketball championship tournament at the Jack Simpson gymnasium in Calgary, Saturday.

Dianna Ros, a 5-foot-7 freshman guard from Montreal, led the Martlets with only eight points, knocking down a pair of treys and two free-throws. Ros, the RSEQ rookie of the year, received player-of-the-game honours along with Huntley.

The UBC lineup featured only one starter under six-feet tall, compared to the McGill lineup, which had only one starter over 5-foot-10. The Thunderbirds, who entered the tourney with the best defensive record in the nation, had a monumental 59-39 edge in rebounding.

"I thought our size really became a factor on the glass today," said Thunderbirds head coach Deb Huband, who is in her 17th year with UBC. "We had some good passing plays between our posts and our defence really stepped it up."

UBC led 19-10 after the opening quarter, 35-21 at the half and 50-27 after three quarters. McGill's lack of offence was further hampered with a nagging back injury to all-star forward Anneth Him-Lazarenko, a 5-foot-10 senior from Panama City, who was limited to six points and seven rebounds in just 19 minutes of court-time.

"They were really tough on the boards and hurt us there," explained McGill head coach Ryan Thorne. "I also didn't think we shot particularly well."

The Martlets only had two field goals in the third before picking up five of their 11 total field goals in the final quarter. UBC finished the game with 32 points in the paint and another 24 on second chance shooting. Both squads got 13 points off the bench.

"I thought our girls did a good job on learning and making some adjustments as the game went along," said Huband on her team's effort to handle an unfamiliar opponent in McGill.

Leigh Stansfield, a 6-foot-3 post from Victoria, B.C., was the only other member of the Thunderbirds to reach double figures in scoring with 13 points. Teammate Kristjana Young of Vancouver added seven and was the top rebounder for the Thunderbirds with 12.

The Thunderbirds advance to the semifinal round, where they will play Ottawa, which defeated Saskatchewan 73-70 in overtime. McGill, the RSEQ champions who entered the Final 8 with a 17-12 overall record, will now face the Huskies in the consolation round on Sunday at 2 p.m. (Eastern).