Martin and Bernard named McGill athletes of the week 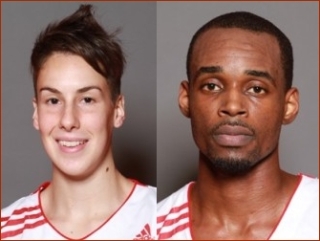 MONTREAL -- Basketball players Marie-Eve Martin of Granby, Que., and Kyle Bernard of LaSalle, Que., are the McGill University athletes of the week for the period ending Jan. 30, 2010.

Martin, a 5-foot-7 guard with the Martlets, scored 24 points, including a game-winning three-pointer at the final buzzer, as visiting McGill edged Laval 62-59 in women's basketball, Friday, improving to 9-1 in the Quebec conference standings. Martin converted an in-bound pass with 1.4 seconds remaining and drained her sixth trey of the night to tie the single-game McGill record for three-pointers. The 21-year-old sociology sophomore, made nine of 17 shots from the field, including a 6-for-11 performance from three-point range. She  was also credited with four steals and three rebounds.  Martin joined the Martlets in 2009 out of Vanier College.

Bernard, a 6-foot-4, 180-pound forward, scored 23 points for the Redmen in a 67-65 loss at Laval. The 23-year-old sociology senior shot 7-for-14, including 1-for-2 from the three-point arc, and made all eight of his free-throws attempts. Bernard, who rejoined the Redmen this season after a two-year sabbatical, is a product of John Abbott College,