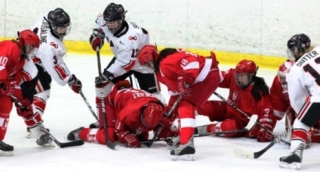 OTTAWA - Charline Labonte of Boisbriand, Que., made 24 saves and posted her 66th career shutout as the No.1-ranked McGill Martlets skated to a 4-0 whitewash over Carleton, Friday, to sweep their Quebec University Hockey League semifinal series in two straight games.

McGill, which triumphed 1-0 in the series opener last Wednesday, won for the 103rd consecutive time against an opponent from the Quebec conference. It was also the 19th straight QUHL playoff win for the Martlets, who improved to 58-0-1 lifetime against the Ravens.

Four different players scored for McGill, which had a 39-24 edge in shots at the Carleton Ice House.

Freshman Katia Clement-Heydra of St. Bruno de Montarville, Que., strck first at 4:44 and defenceman Lisa Zane, a fifth-year senior from Mississauga, made it 2-0 on the power-play with just two seconds remaining in the first period.

After a scoreless middle stanza, McGill came out strong in the final session. Sophomore Chelsea Saunders of Ottawa tallied at the 32-second mark and Alessandra Lind-Kenny, a senior from Calgary, put the game on ice at 4:48.