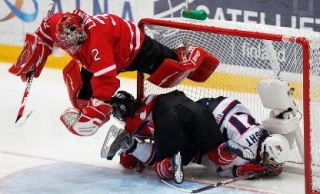 Labonté, a physical education senior from Boisbriand, Que., made 20 saves for her third straight shutout against CIS opponents in a contest that took only an hour and 53 minutes to play. It also was her 34th whitewash in league play which moved her one ahead of Laurier's Liz Knox for most regular-season shutouts in CIS history. It was also the 42nd consecutive QUHL victory by Labonté, who owns a 55-1-0 lifetime record in regular-season action.

"Charlie was really sharp tonight," said McGill head coach Peter Smith. "We could tell early on that she was really focussed and into it. She was playing the puck well and that set the tone. It gives the whole team confidence when she is on her game."

Four different players scored for the Martlets, including the game-winner by sophomore Kim Ton-That of Vaudreuil-Dorion, Que., on the power-play only eight minutes into the opening period.

"We had some good jump," added Smith. "We moved the puck well and once we scored on the power play to take the lead, I could tell that we were going to come up with a solid effort."

Eight minutes later, McGill took a 2-0 lead when Lainie Smith, a junior from Aurora, Ont., netted her fourth of the campaign. Freshmen Katia Clement-Heydra of St. Bruno de Montarville, Que., put the game out of reach early in the middle frame and set up McGill's fourth marker by Alessandra Lind-Kenny, a senior from Calgary, at 2:09 of the final stanza.

MARTLET MURMURS: Labonté, who improved to 6-0 on the season, leads all CIS netminders in shutouts (4), goals-against average (0.66) and save percentage (.957)...The two points by Clement-Heydra moved her into the QUHL scoring lead with a 4-8-12 record in eight games. Teammate Ann-Sophie Bettez, a senior from Sept-Iles, Que., who registered a pair of assists, is second in the scoring race with a 5-6-11 dossier... Team captain Cathy Chartrand continues to lead all CIS rearguards in points. She has a 5-5-10 record in eight contests.