Hill and Beaumont-Courteau named McGill athletes of the week 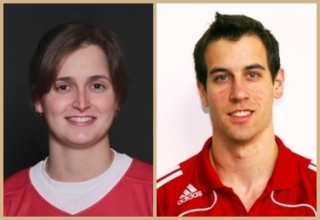 MONTREAL - Caroline Hill of Dorval, Que., and Maxime Beaumont-Courteau of Montreal are the McGill University athletes of the week for the period ending March 6, 2011.

Hill, a fifth-year forward with the women's hockey team, scored four goals and added a pair of assists in two games as the Martlets swept the Quebec conference best-of-three league championship series against the Montreal Carabins. The 5-foot-5 physical education senior was involved in all four goals in the series-opening 4-1 win over the Carabins, scoring twice and adding a pair of helpers. She then tallied twice in the series-clinching 8-1 victory on Friday. Hill, who celebrated her 25th birthday on Sunday and played for Canada at the recent FISU world university games in Turkey,  is a product of The Loomis Chaffee School in Windsor, Conn.

Beaumont-Courteau, a 6-foot-2, 170-pound senior on the men's track and field team, broke the McGill record in the pole vault at the Quebec provincial indoor championships. The 23-year-old medical student cleared a height of 4.80 metres on his first jump at the Centre Claude Robillard on Saturday. It surpassed his own personal best of 4.65m and marked the third time this season that he had broken the school record in that event. Prior to enrolling at McGill in 2006, he graduated from Ahuntsic College.