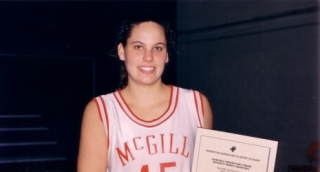 Anne Gildenhuys, a 2009 inductee to the McGill Sports Hall of Fame, is today's featured profile.

A product of Elmwood high school in Ottawa, the 5-foot-10 power forward developed her game dramatically at McGill and was a three-time all-star with the basketball Martlets from 1993 to 1998. Renowned for being a hard-worker, she showed tremendous improvement each season and by her fifth campaign, led the nation in scoring, was named as the league’s player of the year and earned all-Canadian second-team honours.

Gildenhuys also starred as an Honours student in the classroom, meriting Academic All-Canadian status and making the Principal’s student-athlete Honour Roll while earning a mechanical engineering degree in 1998.

She is one of only three McGill women on record to reach the 20-20 club for points and rebounds in the same game. On Nov. 7, 1997, she scored 36 points in a game against Lakehead, third-highest single-game total in McGill history. More than a decade after graduating, Gildenhuys still ranks as the second-highest scorer in McGill history with 2,199 points in 131 games overall for a career average of 16.8 points per game.

A native of Ottawa who now resides in Calgary, Gildenhuys turns 35 on Aug. 18 and will become the fourth youngest inductee to enter the hallowed Hall, behind football running back Michael Soles, basketball forward Vicky Tessier and soccer defender Chris Drysdale, each of whom were honoured in their 34th year.

The 2009 induction luncheon, scheduled for Thursday, Oct. 15, 2009, officially kicks off McGill's Homecoming Week celebrations. Tickets for the event are $65 and can be reserved by contacting Kathryn Weaver at kathryn.weaver [at] mcgill.ca or 514-398-7002.

Hockey All-Canadian Pierre Gendron will be featured on July 15.