This Date in History: Naismith invents basketball on December 21, 1891 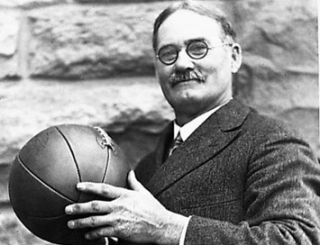 Basketball, a game that started with 18 men at the School for Christian Workers (later the International YMCA Training School, now Springfield College) in Springfield, Mass., has grown into a game that more than 300 million people play worldwide. The man who created this instantly successful sport was Naismith, an inaugural inductee to the McGill Sports Hall of Fame in 1996.

His first intention was to bring outdoor games indoors, namely, soccer and lacrosse. These games proved too physical and cumbersome. At his wits' end, Naismith recalled a childhood game, that he had referred to as "Duck on a Rock", that required players to use finesse and accuracy to become successful. After brainstorming this new idea, Naismith developed the game of basketball and its 13 original rules. The first formal game was played on December 29, 1891. That day, he asked his class to play a match in the Armory Street court: 9-versus-9, using a soccer ball and two peach baskets.

As basketball's popularity grew, Naismith neither sought publicity nor engaged in self-promotion. He was first and foremost a physical educator who embraced recreational sport but shied away from the glory of competitive athletics.

Although he never had the opportunity to see the game become the spectacle it is today, Naismith's biggest thrill came when he was sponsored by the National Association of Basketball Coaches to participate in the ceremonial tip-off when basketball become an Olympic sport at the 1936 Summer Games in Berlin.

Naismith was an intense student, collecting 11 academic degrees from the diverse fields of philosophy, religion, physical education and medicine.

He competed in rugby-football, soccer and gymnastics at McGill University and graduated in 1887, among the top 10 in his class with a B.A. Honours in philosophy and Hebrew. Only 160 pounds, legends quickly grew on campus about his strength and agility. As a McGill sophomore in 1884-85, he volunteered to play centre in practice one day for an injured rugby-football player. Despite having never played before, he became an instant starter on the team and did not miss a game over the next three years.

He later taught physical education and became McGill's first full-time instructor of athletics before accepting a position at the YMCA College in Springfield, Mass., where he devised the rules to basketball. He also served as a Presbyterian minister.

"He had a remarkable career - a career the likes of which probably no other Canadian ever has had," said former classmate Rev. W.D. Reid in 1939.

Although Naismith became famous for his invention of a new sport, that stroke of genius never brought him fame or fortune during his lifetime, but he did attain enormous recognition following his death in Lawrence, Kansas on Nov. 28, 1939. The Naismith Memorial Basketball Hall of Fame was opened to the piblic in 1968 at Springfield, Mass., a tribute that forever makes James Naismith synonymous with basketball.