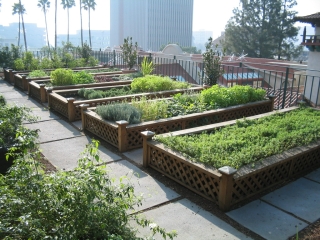 In a number of cities around the world, residents have transformed previously derelict sites, ignored corners and over-grown verges into green and productive vegetable plots

For example, in York, UK, an "edible map" reveals that there is garlic mustard and horseradish growing in abundance alongside the river, and plums will be available on a tree in a street in Osbaldwick by August.

But how much difference can urban agriculture make? And if every city followed York's example, how many people could be fed? A new study in Environmental Research Letters (ERL) provides some answers.

Locating every unused urban nook and cranny, and calculating how much food it could produce, is a herculean task. So instead, Federico Martellozzo from the University of Rome, Italy, and colleagues turned the problem on its head and asked what proportion of our cities would have to be set aside to provide urban-dwellers with all the vegetables they need.

"Given that cereals alone occupy much more land than all urban areas combined, it is clear that urban agriculture cannot literally feed the world," said Martellozzo, who was at McGill University in Canada when he carried out this research. "However, urban agriculture could help hundreds of thousands of people increase their intake of vegetables."