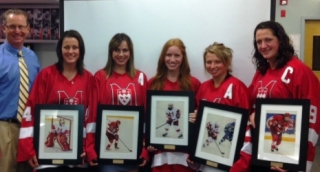 MONTREAL - Ann-Sophie Bettez of Sept-Iles, Que., and Mélodie Daoust of Valleyfield, Que., each received a couple more pieces of hardware to add to their trophy cases at the 15th annual McGill University women's awards banquet held Monday at the McConnell Arena Alumni Lounge.

Team captain Cathy Chartrand, a senior from Lac Nominingue, Que., was named as the most outstanding defenceman and Darragh Hamilton, a junior forward from Ormstown, Que., was selected as the most improved player.

CIS coach of the year Peter Smith presented team jerseys, framed portraits and flowers to his five seniors, including fifth-year veterans Bettez and Chartrand, plus goaltender Charline Labonté and forward Jordanna Peroff of Keswick, Ont., each of whom hold the rare distinction of five trips to the CIS championship tourney, winning gold on three occasions. Also graduating is Lainie Smith, a fourth-year forward from Aurora, Ont.

Bettez, an alternate captain who was named two weeks ago as McGill's female athlete on the year, finished second among conference leaders in both points (37) and assists (24) in 20 contests. The 5-foot-4 forward and 24-year-old marketing major is a two-time conference MVP and was five-time all-Canadian. She will graduate as McGill's all-time leader in goals (148), assists (175) and points (323) in 196 games overall.

Daoust, a 5-foot-6 centre, merited all-conference and second-team all-Canadian status in her university debut after winning the Quebec league scoring title with an impressive 18-25-43 record in only 18 contests. Her average of 2.39 points per game was the best in the country, while her point total was the third-best in the history of the Quebec league. The 20-year-old physical education freshman, who also plays for the Canadian under-22 squad, ended up fifth in the nation in goals, third in points and second in assists, despite playing significantly fewer games in the RSEQ conference.

Chartrand, who earned all-Canadian honours for the fourth consecutive year, ranked fourth among CIS rearguards with 22 points, including six goals, in 19 regular-season contests. She registered 11 goals and 41 points in 40 games overall and wraps up a phenomenal university career as the team's all-time top scoring blueliner with an impressive 80-178-258 record in 180 games overall.

Hamilton, a defensive forward majoring in mathematics, registered six assists - four of them in post-season play - in 39 games overall.

Labonté, an Olympic gold medalist, is completing post-graduate studies in sports psychology after earning a physical education degree in December. A five-time all-Canadian who owns almost every McGill goaltending record, she posted an incredible 160-17-3 record and 81 shutouts in 180 starts overall, with a stingy 0.98 goals against average  and a stellar .948 save percentage.

Peroff, an alternate captain who graduated last spring with an arts degree in religious studies, returned for a fifth season and completed a certificate in leadership. In 194 career contests overall, she scored 139 points, including 57 markers.

Smith, a defensive-forward and kinesiology major, posted a 12-15-27 record in 156 games overall.