Experts: Apple users can say no to being tracked with new software update 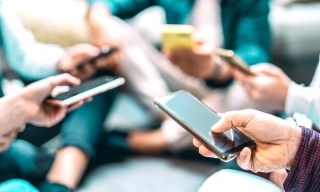 Apple rolled out a software update for its mobile devices that gives users the option of stopping apps from tracking their location and sharing other identifying information with third parties. Services such as Facebook and others currently have the ability to track users on mobile devices in order to learn more about them to target advertisements and other location-based services to them. In some instances, the tracking is in place even if the user is not actively using the app in question. (CBC News)

“By requiring apps to ask for permission to track users outside of the app, the new iOS 14.5 tracking transparency feature may sound simple, but it has huge consequences. It gets a step closer to de-bundling consent, meaning that users can choose over different options instead of having a single ‘take it or leave it’ choice from app developers. More importantly, the choice is significant because the back-end data sharing among apps that users can now prevent thanks to this feature will reduce privacy risks.

Ignacio Cofone is an Assistant Professor in the Faculty of Law, where he teaches artificial intelligence law, business associations and privacy law. His research explores how the law should adapt to technological and social change with a focus on privacy and algorithmic decision-making. In his latest projects, he proposes how to evaluate harm in privacy class actions and how to prevent algorithmic discrimination.

“Apple has taken a significant step in the direction of preserving user privacy, one that is long overdue in the tech industry. While the App Tracking Transparency feature does not change much from a technical perspective, it does empower Apple users by making them aware of tracking data and giving them a choice.”

Grant McKenzie is an Assistant Professor in the Department of Geography, where he leads the Platial Analysis Lab, an interdisciplinary research group that works at the intersection of information science and behavioral geography. Much of his work examines how human activity patterns vary within and between local regions and global communities.

“By requiring an opt-in for sharing of certain information with third parties, Apple’s App Tracking Transparency feature is the beginning of a transformation of the existing paradigm for consumer privacy. At the same time, businesses will most likely suffer from less effective advertising and thus a reduced bottom line.”

Allen Mendelsohn is a Sessional Lecturer at the Faculty of Law, where he teaches a course on Internet Law. He is a Montreal-based independent practitioner specializing in internet and technology law.

“Apple's privacy policy should be seen primarily to concentrate ad revenue in Apple's ecosystem. We should focus on privacy violations within the platform. For example, through its own mobile location tracking or the use of Apple News, the company can find out a lot about its consumers and can monetize that information throughout its apps.”

Renee Sieber is an Associate Professor cross-appointed to the Department of Geography and the Bieler School of Environment and an Affiliated Member of the School of Computer Science. Her research focuses on rewiring geographic information systems for social change, tools for urban and sustainable development and virtual activism.