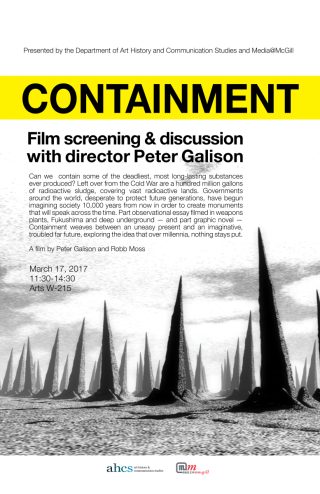 Synpopsis: Can we  contain some of the deadliest, most long-lasting substances ever produced? Left over from the Cold War are a hundred million gallons of radioactive sludge, covering vast radioactive lands. Governments around the world, desperate to protect future generations, have begun imagining society 10,000 years from now in order to create monuments that will speak across the time. Part observational essay filmed in weapons plants, Fukushima and deep underground — and part graphic novel — Containment weaves between an uneasy present and an imaginative, troubled far future, exploring the idea that over millennia, nothing stays put.

A film by Peter Galison and Robb Moss

Bio: Galison is interested in the intersection of philosophical and historical questions such as these: What, at a given time, convinces people that an experiment is correct? How do scientific subcultures form interlanguages of theory and things at their borders?

More broadly, Galison's main work explores the complex interaction between the three principal subcultures of twentieth century physics--experimentation, instrumentation, and theory. The volume on experiment, How Experiments End (University of Chicago Press, 1987), and that on instruments, Image and Logic (University of Chicago Press, 1997), are to be followed by the final volume, "Building, Crashing, Thinking," that is still under construction. Einstein's Clocks, Poincaré's Maps (W.W. Norton, 2003) begins the study of theory by focusing on the ways in which the theory of relativity stood at the crossroads of technology, philosophy, and physics. Image & Logic won the Pfizer Award from the History of Science Society in October 1998.

In addition, Galison has launched several projects examining the powerful cross-currents between science and other fields. His book (with Lorraine Daston), Objectivity (Zone Books, 2007) asks how visual representation shaped the concept of scientific objectivity, and how atlases of scientific images continue, even today, to rework what counts as right depiction. Further work on the boundary between science and other fields includes his co-edited volumes on the relations between science, art and architecture, The Architecture of Science (MIT Press, 1999; ed. with Emily Thompson) and Picturing Science, Producing Art (Routledge, 1998; ed. with Caroline A. Jones), as well as Big Science: The Growth of Large-Scale Research (Stanford University Press, 1992; ed. with Bruce Hevly), The Disunity of Science: Boundaries, Contexts, and Power (Stanford University Press, 1996; ed. with David J. Stump), Atmospheric Flight in the Twentieth Century (Kluwer, 2000; ed. with Alex Roland), Scientific Authorship: Credit and Intellectual Property in Science (Routledge, 2003; ed. with Mario Biagioli), and Einstein for the 21st Century: His Legacy in Science, Art, and Modern Culture (Princeton University Press, 2008; ed. with Gerald Holton and Silvan S. Schweber).