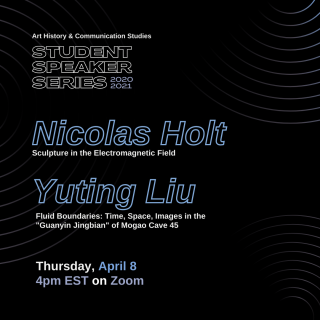 Please join us next week on Thursday, April 8 at 4PM EST (on Zoom) for two great presentations and, afterwards, a Q&A period––we look forward to your participation!

You can join the meeting at the following link:

Nicolas Holt, “Sculpture in the Electromagnetic Field”
In the late 1960s, Chilean-American media artist Juan Downey constructed a series of electronic sculptures designed to detect, produce, and transform electromagnetic energy into different, typically more perceivable forms for their human spectators. These sculptures—outfitted with different sensors, transmitters, and receivers—could turn inaudible radar waves or cosmic background radiation into light, sound, and even mechanical vibration. The current scholarly consensus is that these works and their participative conditions are emblematic of then contemporary, cybernetic theories of information, communication, and feedback. What’s less often remarked about these works, and what this presentation will foreground, are the energetic specifics of the electromagnetic fields they generate and by which they are sustained. Through this shift in emphasis, this presentation will show how the electronic sculptures can be understood not as embodying cybernetic thought, but rather making evident where even the most advanced technical media of the information age only ever offer a partial glimpse of the vast energetic environment that surrounds and activates them. In so doing, this presentation approaches an aesthetics of energy, and offers an alternative to the totalizing logic of the cybernetic paradigm that has thus far dominated the history of 1960s media art.

The relationship between texts and images is a critical issue in understanding Jingbian (sutra painting 經變), a kind of visual representation of Buddhist scriptures, and attracted many scholars to provide their understanding of this art format. This relationship in the Guanyin Jingbian (Avalokiteśvara Sutra Painting觀音經變) of Mogao cave 45 in Dunhuang is particularly prominent. By zooming on this painting, this study will discuss the relationship of the texts and images, and ask questions like if the creation of the painting strictly follows the texts or not and how the medieval Chinese understood the painting. While the painting was painted based on the Guanyin Jing (Avalokiteśvara Sūtra 觀音經), a fluid relationship of time, space, and images, which are absent in the sutra, are formed in the painting. This study aims to understand these ambiguities of this painting by situating it with the related texts, and the visual culture of Medieval China. It contends the Guanyin Jingbian is not an illustration of the Guanyin Jing but has its own visual logic. It demonstrates the painting reflects the imagined world created within the visual culture of medieval China, which was featured by the beliefs of efficacious icons.