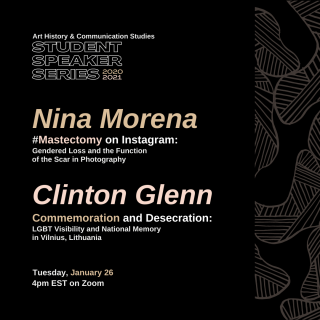 We’re happy to invite you to the second event in this year’s AHCS Student Speaker Series, this time featuring two presenters: Nina Morena and Clinton Glenn, both PhD students of Communication Studies at McGill. Nina's talk is entitled "#Mastectomy on Instagram: Gendered Loss and the Function of the Scar in Photography," while Clinton is presenting "Commemoration and Desecration: LGBT Visibility and National Memory in Vilnius, Lithuania."

Please join us on Tuesday, January 26th at 4PM EST (on Zoom) for two great presentations and, afterwards, a Q&A period––we look forward to your participation!

A Zoom link will be sent out closer to the date.

#Mastectomy on Instagram: Gendered Loss and the Function of the Scar in Photography –– Nina Morena

Posts tagged #mastectomy on Instagram contain a range of breast cancer-related content, including patient selfies which sometimes reveal mastectomy scars. Instagram has justified their decision to allow post-surgery photos: “We understand that undergoing a mastectomy is a life-changing experience” (Instagram Help Center). My paper will explore the function of the mastectomy scar in photography. I conceptualize the mastectomy – a surgery with gendered implications – as a form of gendered loss, and of posting photos as a performance of such loss. However, rather than considering loss in the traditional negative sense, this paper considers the possibility of loss as affirmation and follows Audre Lorde’s feminist reading of the mastectomy. Refusing to consider breast cancer as a cosmetic problem, Lorde writes, “I also began to feel that in the process of losing a breast I had become a more whole person.” Following Elaine Scarry’s assertion that pain is resistant to language, this paper considers the medium of photography and the affordances of social media such as Instagram as sites which allow for the expressions of pain, grief, and mourning on the patient’s own terms.

During the 2019 Baltic Pride March for Equality in Vilnius, Lithuania, an anonymous individual scaled the statue of the nineteenth-century proto-feminist Lithuanian writer Žemaitė and tied a pride flag around her head. In response to images of the incident going viral, conservative blogger Cepilinus complained to local police, stating that the act violated a Lithuanian law forbidding the desecration of national monuments or places of mourning. More recently, the municipal administration of Vilnius has taken concerted efforts to remove memorials to controversial figures of Lithuanian history, particularly those connected with the partisan movement during the Second World War who had posthumously been accused of collaboration with the Nazis. This talk explores the contentious nature of monuments in Lithuania, particularly concerning the rising visibility of LGBT activism in the country and the conservative backlash that this has entailed. In particular, right-wing activists have accused the Vilnius city administration of being in league with LGBT rights activists, leading to the desecration of Lithuanian national history and identity. I also examine how the contentious nature of national memorial is linked to Lithuanian identity, and by extension, the fight against “gay propaganda” and LGBT visibility in the public sphere.