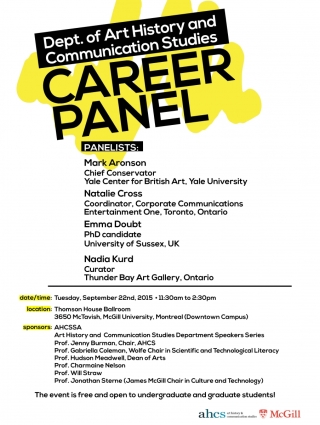 Mark Aronson is the chief conservator at the Yale Center for British Art, and is a critic at the Yale School of Art.  He received a B.A. from Reed College, an M.S. in the conservation of art from the University of Delaware, and a certificate of study in painting conservation from the Center for Conservation and Technical Studies at Harvard’s Fogg Museum. His work experiences have included stints at the Frans Halsmuseum, the Philadelphia Museum of Art; and the Cincinnati Art and Getty Museums. He served as the chief conservator of the Yale University Art Gallery for fourteen years and has lectured in Yale’s History of Art Department. Mr. Aronson is particularly interested in old and modern master painting techniques and attitudes toward restoration.  He has spoken and/or published on the history of conservation at Yale, the treatment of Italian Renaissance painting, Sir Joshua Reynolds, the Anglo-American artist Benjamin West and the Haitian painter Louis Rigaud.

Natalie helps drive corporate branding efforts, government relations, and internal communications across all territories and divisions for Entertainment One (eOne), one of the world’s leading international entertainment companies that specializes in the acquisition, production and distribution of film and television content.

With over five years’ experience in the film and television industry, Natalie most recently worked as Production Coordinator for eOne’s Family television division, and previously as Executive Assistant to eOne’s President and Chief Operating Officer for Filmed Entertainment.

Natalie has a Certificate in Entertainment Law from Osgoode Law School, an MA in Media Production from Ryerson University, and in 2010 she obtained her B.A. Honours in Political Science, minor Communications Studies from McGill University.

Emma Doubt is an AHRC-funded PhD candidate in the Art History Department at the University of Sussex in the United Kingdom. Her research on the nineteenth-century Cherokee photographer Jennie Ross Cobb touches on issues of gender, race, and transculturation in early women’s photography. She holds a BA in literature and art history and an MA in art history, both completed at McGill University. Prior to commencing her doctoral work, she worked for three years in the commercial art sector in London, UK, first at Hauser & Wirth Gallery and next at the Bernard Jacobson Gallery in Mayfair.

Nadia Kurd is a curator and art historian with a PhD in Art History from McGill University. Her dissertation examined the making and meaning of mosque architecture in North America. She has written for a number of artist catalogues and publications such as FUSE Magazine, the International Journal of Islamic Architecture, Journal of Canadian Art History and Proteus: A Journal of Ideas. In addition to working at arts organizations such as the South Asian Visual Arts Centre, Ontario Association of Art Galleries and the Prison Arts Foundation, Nadia is currently the Curator of the Thunder Bay Art Gallery, where her focus is on community engagement and emerging artists in Northwestern Ontario. In recognition of her work, she was awarded the Northwestern Ontario Visionary Award in 2014.