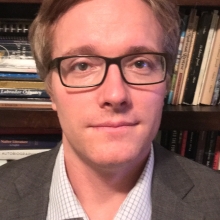 Don Nerbas is Associate Professor and the St. Andrew’s Society/McEuen Scholarship Foundation Chair in Canadian-Scottish Studies. He is also a member of the Montreal History Group / Groupe d’histoire de Montréal. His work centres on the history of capitalism, particularly its social, political, and cultural dimensions. And he has published widely on the politics of business and the political economy of capitalism in Canada. His current research centres on Cape Breton’s coal trade and the social and political history of Cape Breton’s Sydney coalfield in the 19th century, which was powerfully shaped by Scottish migration and settlement, an aspect of the entangled histories of colonialism and industrialism. More broadly, his historical interests include the Scottish factor and the rise of capitalism during the long nineteenth century in northern North America as well as social biography.

Don is the author of Dominion of Capital: The Politics of Big Business and the Crisis of the Canadian Bourgeoisie, 1914-1947 (University of Toronto Press, 2013) and co-editor (with Dimitry Anastakis and Elizabeth Kirkland) of Montreal’s Square Mile: The Making and Transformation of a Colonial Metropole (University of Toronto Press, forthcoming 2023). His recent articles include “Scots, Capitalism, and the Colonial Countryside: Impressions from Nineteenth-Century Cape Breton,” History Compass 18, 11 (November 2020) and “Empire, Colonial Enterprise, and Speculation: Cape Breton’s Coal Boom of the 1860s,” Journal of Imperial and Commonwealth History 46, 6 (2018).