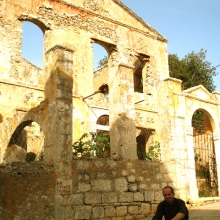 After being admitted in Engineering School in Greece, I moved to the USA where I combined physics with philosophy. Eventually space-time led me to history. Following my studies in the USA and France, I worked in the latter (teaching at Sciences-Po, EHESS, EPHE) and in Greece (research fellow of the Ecole française d’Athènes), before moving to McGill’s History Dept in 2011, where I also hold the Papachristidis Chair in Modern Greek and Greek-Canadian Studies. I also served as the EFA Directeur d’Etudes between 2016 and 2020. Given the journey, it is only natural that I have an interest in all aspects of nomadism, in intercrossing frames of reference as well as in educational systems.

I am a historian of human mobilities and institutional inertias varying approaches of social, conceptual and connected history. More precisely, my primary interests lie with the study of transnational networks of activists (religious and educational) and their role in institutional change and state formation, especially with regard to Greece within its Balkan and Mediterranean context in the modern era. My first study on the interaction between Religion and State in Greece during the ottoman age of confessionalization (the long 19th c.) is published in French (with upcoming Greek and English versions). Being sensitive to the questions of Open Science and Open Data in the age of Digital Humanities, I have made available the collected and treated data in the form of an original digital geospatial tool. More traditionally I have also published two edited volumes (Religious Communities and Modern Statehood and Les relations interconfessionnelles dans le Sud-Est européen et la Méditerranée orientale 1854-1923) with regard to questions of inter-religious contacts in the Eastern Mediterranean, I and am currently finishing a work on the transnational contours of educational innovation in the Eastern Mediterranean. My interest in mobilities and… Montreal, have led me to pilot Immigrec an interdisciplinary and international research project at the crossroads of oral history, digital storytelling-archiving and public history which led to the production of a Virtual Museum of Greek immigration to Canada. Finally, over five years I co-piloted a research project on the Global and Civilian History of a Forgotten Army, the Armée d’Orient (1915-1919), the WWI army having the most important percentage of colonial troops. I directed an exhibition and its catalogue and a collective volume offering the state of the question is scheduled to be published in 2021.

As a historian of European and Mediterranean interactions and transactions I study the emergence of different modernities, between the 18th and mid 20th centuries. I use as my entry point Greece and the Greek-speaking world in their various synchronic relations to their Ottoman, Balkan and Mediterranean contexts and to the European imaginary. Thus, I teach entry level and lecture courses in European History ( HIST 215 - Modern Europe , HIST 315 - Themes in World History , HIST 349 - Greece: From Ottoman to the EU ). I also offer upper level thematic seminars on my specialization areas such as education (HIST 472 -History of European Education), religious and other interactions in the Eastern Mediterranean and its port cities during the modern era ( HIST 436 - Topics: European History ), the history of state formation and institution building ( HIST 597D1 - Seminar: Modern Europe ), or the modern construction of Antiquity, i.e. a history of the development of archeology as a modern discipline, classics as an element of European education and culture, and tourism as a mass cultural consumption practice, but also the discontents of these exact practices ( CLAS 404 - Classical Tradition , cross-listed as HIST 436 - Topics: European History ). Every now and then I like to honor some of my early career mentors and teach history of the Byzantine empire ( HIST 362 - Byzantine Hist&Historiography ), as well as the theory of historical practices and writing whether in the earlier HIST 299 -The Historian’s Craft or more advanced level HIST 585 – Historical Interpretation. I also offer more specialized courses with a varying topic on Modern Greek Culture and Society for students interested to delve further in Greek culture or to pursue a minor in Hellenic studies.