Your friends have more friends than you do 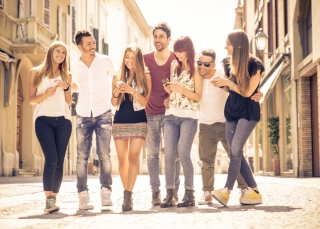 No matter how smart and funny you think you are, those you follow on Twitter really do have a larger following than you. And the same holds true for Facebook. But there is no reason to feel badly about any of this, according to Naghmeh Momeni Taramsari, who is currently working on her PhD in Electrical and Computer Engineering at McGill University. According to her research, which was published earlier this spring in the journal PLOS ONE, it is all due to the inherently hierarchical nature of social media networks, where, in the social hierarchy of connections, people mostly either follow up or across; they rarely follow down.

“Most people tend to think that they are better than their friends when it comes to intelligence, memory, popularity, and other personal traits,” says Taramsari. “However, a recent study by other researchers shows that this perception is false, at least in the context of online social networks. In reality, our friends really have more friends than we do, on average. Moreover, our friends are more active (post more material), and are more influential (their posts are viewed and passed on more often). This is known as the Generalized Friendship Paradox.”

So the McGill researchers set out to discover to what extent the friendship paradox is present in the online social network Twitter, and how exactly it is reflected in the network structure (as in, who follows whom).

You may be less popular, but you’re not alone

In case you are starting to feel discouraged about it, don’t worry. After using new methods to measure user influence and the extent to which the Generalized Friendship Paradox exists in social networks, a research team has concluded that almost all users (up to 90 per cent of us) experience this paradox---even those with relatively high levels of activity and influence.

That’s because people at any level of activity and influence tend to follow others who are more active and influential than themselves, according to Prof. Michael Rabbat, who teaches in McGill’s Dept. of Electrical and Computer Engineering and is the senior author on the paper.

In the end, even online, it’s because we all want to be friends with the popular kids.

To read the full paper:

“Qualities and Inequalities in Online Social Networks through the Lens of the Generalized Friendship Paradox” by Naghmeh Momeni Taramsari and Michael Rabbat in PLOS ONE: http://journals.plos.org/plosone/article?id=10.1371/journal.pone.0143633