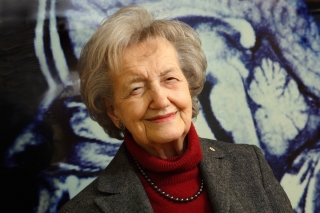 Dr. Brenda Milner, an active researcher at the age of 95 at the Montreal Neurological Institute and Hospital, McGill University, has been awarded the 2014 Dan David Prize for her fundamental contributions to the science of memory and the brain. Dr. Milner is widely recognized as one of the founders of cognitive neuroscience–the field that brings together brain and behavior. Dr. Milner, who is the Dorothy J. Killam Professor of Psychology, shares the Prize for the category Present: “Combatting Memory Loss”, with Peter St. George-Hyslop (University of Cambridge) and John A. Hardy (University College, London).  All three have made outstanding contributions to the understanding of memory loss and continue to pioneer the way forward to finding a solution.

“I am absolutely delighted to have received the Dan David Prize with Dr. St. George-Hyslop and Dr. Hardy,” said Professor Milner.  “I would like to express my sincere gratitude to the Dan David Foundation and the review committee for this tribute.”

Each year, the Dan David Foundation, headquartered at Tel Aviv University, awards three prizes of $1 million for outstanding scientific, technological, cultural or social achievements.  The prizes are awarded within the context of past, present and future time dimensions.  This year’s categories are Past: “History and Memory”, Present: “Combating Memory Loss”, and Future: “Artificial Intelligence, The Digital Mind.”

"On behalf of the McGill community, I congratulate Prof. Milner on this remarkable achievement.  Receiving the Dan David Prize is a true testament to Prof. Milner’s distinguished career and seminal discoveries in the area of memory systems.” said Prof. Suzanne Fortier, Principal and Vice-Chancellor of McGill. “We are very proud that her important work continues to be recognized on the international stage and thank the Dan David Foundation for their award to Professor Milner”

As part of Mr. David’s legacy and desire to inspire future generations, awardees are required to donate 10% of the prize money to scholarships for graduate students in their respective fields.

“Receiving the Dan David Prize is a wonderful honour for Dr. Milner,” said Dr. Guy Rouleau, Director of the Montreal Neurological Institute and Hospital of McGill University and the McGill University Health Centre.  “This award recognizes her immense contributions to science and it speaks to her own personal commitment to training and providing opportunities for future generations of scientists.”

For more than six decades, Dr. Milner’s creativity and precision in developing methodology to study amnesic and other patients have led her to conclusions that radically changed the way we think about memory.  Nobel Laureate Eric Kandel credits Dr. Milner with taking the critical step of merging the fields of neurobiology and psychology to form this new field that has spawned a vast body of research in human cognition. Importantly, her research has also had a profound and continuing influence on clinical domains in the development of tests to assess, diagnose, and treat people with brain disorders resulting from traumatic injury and degenerative diseases, and from psychiatric illness.

In 2009, Dr. Milner announced The Brenda Milner Foundation, which underpins her commitment to future scientists and provides opportunities for those around the world to experience the dynamic academic and clinical environment at The Neuro. The Foundation will support and foster young researchers in the field of cognitive neuroscience through postdoctoral fellowships at The Neuro.

Her scientific contributions have been recognized by more than 20 honorary degrees and many prestigious awards from Canadian and international scientific societies. She is a fellow of the Royal Society (UK), the Royal Society of Canada and the National Academy of Sciences (USA), and has received numerous prizes and awards including the International Balzan Prize, the Pearl Meister Greengard Prize and the NSERC Award of Excellence.

For more information about the Dan David Prize and to watch the Prize Announcement Video: http://www.dandavidprize.org/.