THIS WEEK IN HISTORY: The world's first organized hockey game was played on March 3, 1875 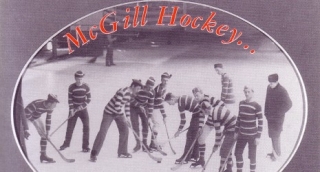 MONTREAL -- The first organized game of ice hockey took place on March 3, 1875 at the Victoria Skating Rink in Montreal, based on a set of rules proposed by a group of McGill University students. The game also featured a number of those students.

The last quarter of the 19th century was a great period of social organization and saw the standardization of many sports. Hockey, as we know it, began in Montreal where James G. A. Creighton, who went on to become a McGill law student, was believed to have played a major role in the established the first set of formal rules.

Two nine-man groups, one of which was captained by Creighton, opposed each other in the world's first-ever indoor public display of an ice hockey game.  The event was played at the Victoria Skating Rink, March 3, 1875, located in the part of Montreal that is now bordered by the following streets -- Drummond, de Maisonneuve and Dorchester (now named Boulevard René Levesque).  This event was promoted in The (Montreal) Gazette prior to the game and a post-game account was also published (see below).

By moving ice hockey indoors, the smaller dimensions of the rink initiated a major change from the outdoor version of the game, limiting organized contests to a nine-man limit per team. Until that time, outdoor games had no prescribed number of players, the number being more or less the number that could fit on a frozen pond or river and often ranged in the dozens. The nine-man per side rule would last until the 1880s, when it was reduced during the Montreal Winter Carnival Hockey Tournament.

The key innovation was the substitution of a square, wooden disk (puck), which offered the players far more control than they had over a lacrosse ball. In 1877, the first organized team, the McGill University Hockey Club, was formed and in 1886, the first national association, the Amateur Hockey Association of Canada, was founded.

Announcement of first game in The Gazette (March 3, 1875)

Victoria Rink - A game of Hockey will be played at the Victoria Skating Rink this evening, between two nines chose from among the members. Good fun may be expected, as some of the players are reputed to be exceedingly expert at the game. Some fears have been expressed on the part of intending spectators that accidents were were likely to occur through the ball flying about in too lively a manner, to the imminent danger of lookers on, but we understand that the game will be played with a flat circular piece of wood, thus preventing all danger of its leaving the surface of the ice. Subscribers will be admitted on presentation of their tickets.

HOCKEY -- At the Rink last night a very large audience gathered to witness a novel contest on the ice. The game of hockey, though much in vogue on the ice in New England and other parts of the United States, is not much known here, and in consequence the game of last evening was looked forward to with great interest. Hockey is played usually with a ball, but last night, in order that no accident should happen, a flat block of wood was used, so that it should slide along the ice without rising, and thus going among the spectators to their discomfort. The game is like Lacrosse in one sense -- the block having to go through flags placed about 8 feet apart in the same manner as the rubber ball -- but in the main the old country game of shinty gives the best idea of hockey. The players last night were eighteen in number -- nine on each side -- and were as follows: -- Messrs. Torrance (captain), Meagher, Potter, Goff, Barnston, Gardner, Griffin, Jarvis and Whiting. Creighton (captain), Campbell, Campbell, Esdaile, Joseph, Henshaw, Chapman, Powell and Clouston. The match was an interesting and well-contested affair, the efforts of the players exciting much merriment as they wheeled and dodged each other, and notwithstanding the brilliant play of Captain Torrance's team Captain Creighton's men carried the day, winning two games to the single of the Torrance nine. The game was concluded about half-past nine, and the spectators then adjourned well satisfied with the evening's entertainment.