Watching the hidden life of materials 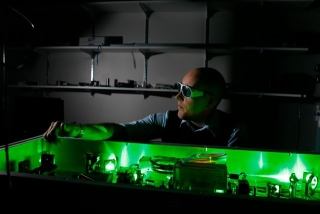 Researchers at McGill University have succeeded in simultaneously observing the reorganizations of atomic positions and electron distribution during the transformation of the “smart material” vanadium dioxide (VO2) from a semiconductor into a metal – in a time frame a trillion times faster than the blink of an eye.

The results, reported Oct. 24 in Science, mark the first time that experiments have been able to distinguish changes in a material’s atomic-lattice structure from the relocation of the electrons in such a blazingly fast process.

The measurements were achieved thanks to the McGill team’s development of instrumentation that could be used by scientists in a variety of disciplines: to examine the fleeting but crucial transformations during chemical reactions, for example, or to enable biologists to obtain an atomic-level understanding of protein function. This ultrafast instrumentation combines tools and techniques of electron microscopy with those of laser spectroscopy in novel ways.

“We’ve developed instruments and approaches that allow us to actually look into the microscopic structure of matter, on femtosecond time scales (one millionth of a billionth of a second) that are fundamental to processes in chemistry, materials science, condensed-matter physics, and biology,” says Bradley Siwick, the Canada Research Chair in Ultrafast Science at McGill.

“We’re able to both watch where nuclei go, and separate that from what’s happening with the electrons,” says Siwick, an associate professor in the departments of Chemistry and Physics. “And, on top of that, we are able to say what impact those structural changes have on the property of the material. That’s what’s really important technologically.”

By taking advantage of these recent advances, the research group has shed new light on a long-standing problem in condensed matter physics. The semiconductor-metal transition in Vanadium dioxide has intrigued the scientific community since the late 1950s.The material acts as a semiconductor at low temperatures but transforms to a highly conductive metal when temperature rises to around 60 degrees Celsius – not that much warmer than room temperature. This unusual quality gives the material the potential to be used in a range of applications, from high-speed optical switches to heat-sensitive smart coatings on windows.

The experiments took place in Siwick’s lab in the basement of McGill’s Chemistry building, where he and his team of grad students spent nearly four years painstakingly assembling a maze of lasers, amplifiers and lenses alongside an in-house designed and built electron microscope on a vibration-free steel table.

To conduct the experiments, the McGill team collaborated with the research group of Mohamed Chaker at INRS EMT, a university research centre outside Montreal. The INRS scientists provided the high quality, extremely thin samples of VO2 – about 70 nanometers, or 1000 times smaller than the width of a human hair– required to make ultrafast electron diffraction measurements.

The diffraction patterns provide atomic-length-scale snapshots of the material structure at specific moments during rearrangement. A series of such snapshots, run together, effectively creates a kind of movie, much like an old-fashioned flip book.

“This opens a whole new window on the microscopic world that we hope will answer many outstanding questions in materials and molecular physics, but also uncover at least as many surprises.  When you look with new eyes you have a chance to see things in new ways,” Siwick says.

The research was supported by the Canada Foundation for Innovation, the Natural Sciences and Engineering Research Council of Canada, the Canada Research Chairs program, and the Fonds du Recherche du Quèbec-Nature et Technologies.