Skin tests traditionally used to predict allergies to amoxicillin, one of the most commonly prescribed antibiotics in children, are ineffective according to a new study led by a team at the Research Institute of the McGill University Health Centre (RI-MUHC) in Montreal. The findings, published in the journal JAMA Pediatrics this week, determined that oral provocation or challenge test, with appropriate follow up, was a more efficient and safer screening method for diagnosing non-life threatening reactions to amoxicillin in children. “Our study suggests that skin tests are essentially useless as diagnostic tests, and that we should go directly to the graded provocation test that is highly sensitive and specific,” says study’s lead author Dr. Moshe Ben-Shoshan, who is an allergist at the Montreal Children’s Hospital at the MUHC (MCH-MUHC) and an assistant professor of Pediatrics at McGill University. “This is a game changer in the way physicians assess amoxicillin allergy in children given the fact that skin tests are still the recommended screening method in hospitals.”

Provocation or challenge (PC) tests are performed with the suspected allergen (for example pollen, food or drug) which involves gradual introduction of the allergen to the patient. Challenge tests are performed in a hospital or clinic, where any serious reactions can be safely managed.

Up to 10 per cent of children develop rashes while on antibiotics. “The majority are diagnosed without further evaluation as allergic to the implicated antibiotic,” explains Dr. Ben-Shoshan who is also a researcher from the Infectious Diseases and Immunity in Global Health Program of the RI-MUHC. “Most of the patients continue to avoid the suspect antibiotic in favor of alternatives which may be less effective, more toxic, and more expensive.” 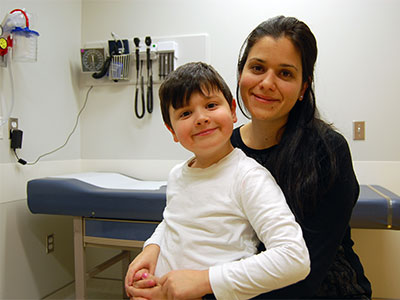 The researchers conducted the largest study of its kind to assess the use of a graded PC in children who presented with a rash due to suspected amoxicillin allergy. They assessed 818 children who presented to the MCH-MUHC Allergy clinic from March 2012 to April 2015. Unlike previous studies all children had to undergo a graded PC. Researchers observed that 94.1 per cent were tolerant to the graded PC for amoxicillin. From all the study’s participants, only 17 had an immediate positive reaction to amoxicillin, and only one within this group had a positive skin test. Indeed for many antibiotics (including amoxicillin), skin tests can have a high false-negative rate. Thirty one had non-immediate reactions developing more than one hour after challenge. All non–immediate reactions were mild and manifested mainly as skin eruptions. “Our study is the first to determine the percentage of immediate and non-immediate amoxicillin allergy in all children presenting with a suspected amoxicillin induced rash through a graded PC,” says Dr. Ben-Shoshan. “Further, we showed that in children with a negative PC, amoxicillin can be safely used in the future, although under 10 per cent may develop mild cutaneous symptoms upon subsequent exposure.’’

According to the researchers, future studies are required to assess factors associated with specific PC outcomes, and in particular researchers should investigate specific association with genetic markers to accurately determine future risk for antibiotic allergic reactions.

The study Assessing the Diagnostic Properties of a Graded Oral Provocation Challenge for the Diagnosis of Immediate and Non immediate Reactions to Amoxicillin in Children was co-authored by Christopher Mill, Marie-Noël Primeau,  Elaine Medoff,  Christine Lejtenyi, Elena Netchiporouk, Alizee Dery, and  Moshe Ben-Shoshan from the McGill University Health Centre, Montreal, Quebec, Canada; and by Andrew O’Keefe from the Memorial University, St John’s, Newfoundland and Labrador, Canada.