The Ryan Express tallies winner before second largest crowd since 1968 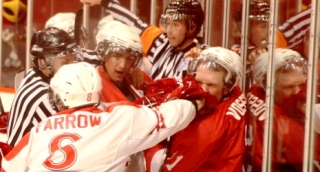 MONTREAL - Ryan McKiernan, a defenceman from White Plains, N.Y., scored the game-winner on a power-play at 13:49 of the second period as No.2-ranked McGill eked out a 3-2 victory over the Royal Military College Paladins, Friday, before 3,780 in men's hockey at the Verdun Auditorium in a rare morning game.

The event was part of a successful "Score with School" promotion by Rooths Sports Events that drew 68 busloads of students from 15 elementary and high schools from the Lester B. Pearson and English Montreal school boards. It marked the second-largest crowd since 1968 to see a university hockey game in Montreal and the biggest since Oct. 21, 2007 when 5,406 watched McGill defeat Concordia for the Ronald Corey Cup at the Bell Centre.

McGill jumped out to an early 2-0 lead when Andrew Wright, a senior from Toronto, and Montrealer Nicolas Biniek, a sophomore, scored at 6:55 and 12:37, respectively.

RMC's Landon Lavictoire of Kirkland Lake, Ont., replied 56 seconds later to put the Paladins back in the game. After McKiernan made it 3-1 for the Redmen, the pesky Paladins narrowed the gap to 3-2 in the final period when Colin Cook of Halifax scored at 11:02.

It turned dicey for the Redmen in the dying moments when a minor scuffle resulted in an RMC powerplay with 74 seconds remaining. Paladins head coach Adam Shell, who played for McGill from 1999 to 2003, pulled netminder Matt Beirnes for an extra attacker.

McGill appeared to put the game out of reach with 35 seconds remaining when Maxime Langelier-Parent's clearing pass deflected off a linesman along the boards and redirected down the ice into the vacated net. But referee Mathieu Bergeron disallowed what would've been a shorthanded marker, citing a rule (78.5.3) that nullifies a goal "when the puck has deflected directly into the net off an official."

Other than the final score, McGill thoroughly dominated the game, holding a 43-20 advantage in shots against an under-manned RMC squad that dressed four players shy of a full 20-man lineup.

"RMC played a great strategic game against us, so full credit to Shell and his staff for getting the most out of a short bench," said Redmen head coach Kelly Nobes. "They were opportunistic on their scoring chances and defended very well using a 2-3 forecheck when they could pressure the puck and a 1-1-3 when they sat back."

Beirnes made 40 saves in a losing cause for the Paladins, while McGill goalkeeper Hubert Morin of St. George de Beauce, Que., stopped 18 pucks, improving his record to 7-2.

"Playing at 10:30 in the mornng was a bit of an adjustment for us," admitted McGill team captain Evan Vossen of Swift Current, Sask., who set his alarm for 5:45 a.m. in order to make the team's pre-game meal at 6:30 a.m. "But it was really loud and there was a lot of energy in the building which was good. It was great for us to promote the benefits of playing a sport at a high level while staying in school. I wish that I had had an opportunity to get a day off school to watch hockey when I was a kid. Everyone on the team was pretty pleased with how well run the event was."

It was the final contest of the semester for the division-leading Redmen, who enter the exam break with a stellar 13-1-2 record. They are off until Dec. 29-30, when they host the Waterloo Warriors (10-4-2) in a pair of non-conference games. RMC, which fell to 2-12-1, resumes play on Jan. 3 when they play at Queen's in the world's oldest ongoing hockey rivalry, which began in 1886. The McGill-RMC series began in 1892 and is the second-oldest rivalry and the Redmen now own a 51-8-4 record against the Paladins, including 10 consecutive wins since their last setback, a 2-1 decision in Kingston on Jan. 26, 2008. McGill will play RMC one more time, on Jan. 13, in the Limestone City.

REDMEN RAP:  Among the seven ING DIRECT bursary recipients announced, were Ann-Sophie Bettez of the McGill women's hockey team and Evan Vossen of the Redmen... Among the faces in the crowd was Rooths president Martin Routhier (1993-98), who recently lost his all-time assist record for McGill defencemen. His mark of 108 helpers now ranks second to All-Canadian Marc-Andre Dorion, who has 134 assists in 150 games played after picking up a pair against the Paladins. Dorion, who was named CIS defenceman of the year in 2008-09, also holds the Redmen all-time record for career points scored by a blueliner (168)... Other Redmen grads spotted at the game included RMC assistant coach Chad Blundy (2000-05), Charlie Lafontaine (1948-49), Dr. Jay McMullan (1981-84), Mike Farmer (1976-79), Mike Nelson (1978-84), Ken Covo (1976-81), John Harris (1984-87), Pierre-Luc Gosselin (2004-06) and Stephen Brayne, principal of Greendale elementary school, who skated for the Redmen from 1975 to 1977.