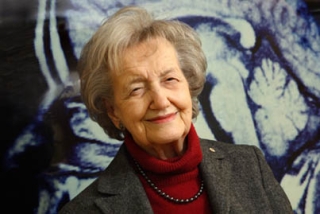 November 21 2012 - Dr. Brenda Milner, pioneer in the field of cognitive neuroscience whose discoveries revolutionized the understanding of memory, is being inducted into the Canadian Science and Engineering Hall of Fame today. The induction ceremony takes place at the Canada Science and Technology Museum in Ottawa. Other inductees are physicist and educator Dr. Ursula Franklin and aviation pioneer J.A.D. McCurdy.

Dr. Milner, an active researcher at the age of 94, is the Dorothy J. Killam Professor at the Montreal Neurological Institute and Hospital of McGill University and the MUHC.  Dr. Milner has had an extraordinary influence on the shape of neuroscience, unraveling the mysteries of the brain during her six-decade long career. Working with HM and many other patients, her fundamental discoveries about memory and brain function created the field of cognitive neuroscience.  Her discoveries on hemispheric interactions and the crucial function of specific brain regions such as the hippocampus have directly impacted the lives of patients undergoing neurosurgical procedures around the world.

Dr. Milner remains active in the field and continues to teach and mentor the next generation of scientists and doctors. In 2007, she created the Brenda Milner Foundation to support and foster young researchers in the field of cognitive neuroscience through postdoctoral fellowships at The Neuro.

She has received numerous accolades throughout her career. She is a foreign associate of the National Academy of Sciences (USA) - one of only sixteen from Canada. She was elected to the Academy in 1976 and to the American Academy of Arts and Sciences in 2005. She has been awarded Honorary Degrees from more than 20 different universities across Canada, the States and Europe. She is the recipient of numerous academic awards including the Gairdner International Award (2005), the Prix Wilder Penfield (Prix du Québec, 1993) and the NSERC Medal of Excellence (2009 and 2010). Dr. Milner is a fellow of the Royal Society of London and the Royal Society of Canada.  She is a Companion of the Order of Canada and in 2009 was promoted to Grand Officer of the Order of Quebec.  Recent awards include the prestigious International Balzan Foundation Award in 2009 ($1 million), the Goldman-Rakic Prize for Outstanding Achievement in Cognitive Neuroscience by NARSAD also in 2009, the Norman A. Anderson Lifetime Achievement Award in 2010, the  Pearl Meister Greengard Prize in 2011 and this year, the Prix Hommage du 50e anniversaire from the Ordre des psychologues de Quebec.

The Neuro
The Montreal Neurological Institute and Hospital — The Neuro, is a unique academic medical centre dedicated to neuroscience. Founded in 1934 by the renowned Dr. Wilder Penfield, the Neuro is recognized internationally for integrating research, compassionate patient care and advanced training, all key to advances in science and medicine. The Neuro is a research and teaching institute of McGill University and forms the basis for the Neuroscience Mission of the McGill University Health Centre.  Neuro researchers are world leaders in cellular and molecular neuroscience, brain imaging, cognitive neuroscience and the study and treatment of epilepsy, multiple sclerosis and neuromuscular disorders. For more information, visit theneuro.com.