The personalities of spiders

Focusing on animal personalities changes the picture for scientific research 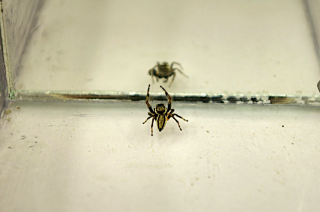 Even jumping spiders have personalities scientists have discovered. A "shy" individual will not make the same choices as a "bold" individual. This means that some individuals, because of their personality type, will capture more prey than others, and will therefore have a larger effect on local ecosystems.

“We know that drinking alcohol can make us act in weird ways, by removing some social inhibitions for example,” says Raphaël Royauté, a former McGill PhD student whose study on the effects of insecticides on jumping spider personality was published recently. “So one of the primary question of my research became: can insecticides cause similar personality shifts in individual spiders?"

The answer it turns out, is that, yes it can for some. Just as drinks and alcohol affect some people more than others. But the crucial fact, for the form that scientific research takes, is that how animals respond to their environment is very much an individual question.

When spiders face themselves in a mirror their personality differences show.

This 'aggressive' spider attacks its own reflection

This 'shy' spider flees from its own reflection

Scientific interest in animal personality, which is about a decade old, has started to highlight the fact that these individual differences have important consequences both at the local ecosystem level and at the level of longer-scale evolutionary changes, since certain individuals may be better at adapting to environmental changes than others – pushing species in certain directions rather than others.

By looking at the individuals and changes in their behaviour rather than averaging out effects on the population as a whole, scientists are now starting to see important effects that they wouldn’t have seen otherwise. Some are starting to re-examine the common scientific practice of reaching conclusions by averaging things out, and focus their research on how a range of environmental factors affect individuals in order to develop a more complex picture of what is going on in the world.