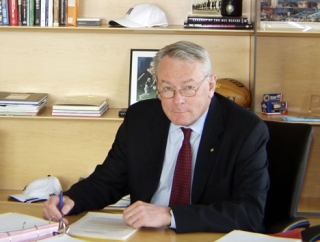 A long-time Montreal-based lawyer specializing in tax litigation at the firm of Stikeman Elliott, he was born Richard William Duncan Pound in St. Catharines, Ont., on March 22, 1942 but was raised in numerous towns, including Ocean Falls, B.C., La Tuque, Que., and Trois-Rivieres.

A star swimmer with the McGill University Redmen from 1958 to 1962 and from 1964 to 1967, he established school records in every freestyle event, winning three Canadian intercollegiate gold medals in each of his freshman, sophomore and senior years.

He earned a commerce degree from McGill in 1962, followed by a bachelor's degree in arts from Sir George Williams University in 1963, where he made the Dean's Honour List. He returned to McGill to complete a law degree in 1967 and was honoured by the Scarlet Key Society.

The 6-foot-2, 163-pound sprinter became the first Canadian to swim the 100-yard freestyle in under 49 seconds and the 100-metre free in under 56 seconds. He owned every freestyle record in Canada up to 220 yards. A Canadian butterfly champion in 1961 and a four-time national freestyle champion (1958, 1960, 1961, 1962), he competed for Canada at the 1959 Pan American Games in Chicago and the 1960 Rome Olympics, where he was the only Canadian to be a finalist in two events, finishing fourth in the 4x400-metre medley relay and sixth in the 100m freestyle. Now, 50 years later, Pound still ranks as the last Canadian to make the Olympic final in the 100m free.

He also competed in the 1962 Commonwealth Games in Perth, Australia, capturing one gold medal (with a Commonwealth record in the 110 free), two silvers and a bronze.

Not only was he Canada's top freestyle sprinter in that era, he was also an outstanding intercollegiate squash racquets player, ranking nationally in both singles and doubles, winning the intercollegiate title twice.

Pound served as secretary of the Canadian Olympic Association in 1968, earned the presidency in 1977, was co-opted as a member of the International Olympic Committee in 1978, went on to serve 18 years on the IOC executive board, including a pair of four-year terms as vice-president and was the inaugural chair of the World Anti-Doping Agency. In 2005, he was named among Time Magazine's 100 most influential people in the world for his relentless efforts to rid sport of performance-enhancing drugs.

He also served 20 years as chair of the McGill Athletics Board, 23 years on the University's Board of Governors and 11 years as chancellor of McGill, receiving an honoray law doctorate in 2009.

The induction luncheon, scheduled for Thursday, Sept. 30, 2010, officially kicks off the University's Homecoming Week celebrations. Tickets for the event are $65 and can be reserved by contacting Kathryn Weaver at kathryn.weaver [at] mcgill.ca or 514-398-7002.