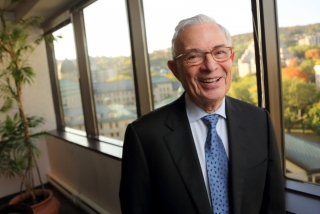 What if we could reduce rates of a wide range of devastating mental illnesses through early detection? Thanks to a significant gift of $2.9M from the Irving Ludmer Family Foundation to The Montreal Neurological Institute and Hospital of McGill University (The Neuro), hope is on the horizon through the expansion of a major collaboration to understand why some children are vulnerable to conditions like autism, attention deficit disorder and social anxiety, and what can be done to prevent these disorders before they take hold. This collaboration will also explore brain disorders in the aging population, such as dementia, in an unprecedented investigation of mental health across the lifespan.

Where brain imaging and neuroinfomatics collide

The Ludmer Center for Neuroinformatics and Mental Health was established in 2013 with a donation of $4.5M to the Douglas Mental Health University Institute and the Jewish General Hospital. The Foundation’s new gift to McGill and The Neuro will add brain imaging and neuroinformatics capacity to the partnership, driving discoveries that will help scientists understand how different genetic and environmental factors influence brain development in children. These discoveries will open new pathways for diagnosis, prevention and treatment, and have a far-reaching impact on millions of children debilitated by mental illness, and the families and communities who help care for them.

“We would like to thank the Ludmer Family Foundation for their vision and generosity exemplified in this transformative gift,” said Suzanne Fortier, McGill’s Principal and Vice-Chancellor. “This collaboration will allow us to build on our strengths in the disciplines related to mental health and the neurosciences, advancing and broadening our understanding of a wide range of brain disorders and how to prevent them before they take hold.”

The Foundation’s newest gift, one of the largest to The Neuro in recent years, will be supplemented by contributions from McGill’s Faculty of Medicine, The Neuro and public and private granting agencies, bringing total funding for this phase of the Ludmer Center to more than $10M. In addition to the Center’s primary focus on childhood and adolescent risk factors, this unprecedented investment will boost research into a host of conditions including Alzheimer’s, schizophrenia and depression.

“The Ludmer Center builds on The Neuro’s 80-year history of leadership in the neurosciences, beginning with Wilder Penfield’s pioneering advances,” said Guy Rouleau, Director of The Neuro.  “This collaborative partnership promises to transform the discipline in much the same way Penfield did, putting Montreal and Quebec at the forefront of a genuine revolution in mental health and human development.”

The Ludmer Center’s co-leaders are among the most celebrated scientists in their respective fields. Michael Meaney is James McGill Professor of Psychiatry, Neurology and Neurosurgery at the Douglas Mental Health University Institute; Alan Evans is James McGill Professor of Neurology and Neurosurgery, Psychiatry and Bioengineering at The Neuro; and Celia Greenwood is Senior Investigator at the Lady Davis Research Institute of the Jewish General Hospital, and Associate Professor in the Departments of Oncology, Epidemiology, Biostatistics and Occupational Health, and Human Genetics at McGill.

The Ludmer Center will draw on state-of-the-art brain imaging and brain mapping techniques housed in Dr. Evans’s laboratory in the McConnell Brain Imaging Centre at The Neuro, providing an unprecedented picture of how mental health and illness are manifested within the brain across the lifespan. This information will drive Dr. Meaney’s groundbreaking epigenetic research, which explores how changes in the environment—even before birth—can affect how children’s brains develop. Dr. Greenwood’s expertise in biostatistics will allow for a thorough analysis of the large quantities of genetic and genomic data needed to identify risk factors in individuals and across populations.

The gift and the expanded partnership will be celebrated at an event on October 23rd at The Neuro, where Drs. Meaney, Evans and Greenwood will discuss the future of mental health research at a panel moderated by Dr. Rémi Quirion, Quebec’s Chief Scientific Officer.