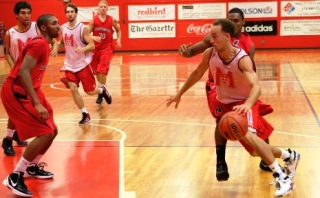 (Newcomer Adrian Hynes-Guery, an NCAA transfer, scored 13 points in an impressive 30 minutes of court time against the Northeastern Huskies. Photo by Derek Drummond)

Nicolas Langley, a senior from Golden, B.C., tallied 14 for the Redmen, who opened their 112th season. He shot 6-for-11 from the floor, hitting half of his four attempts from beyond the arc.

It was the second lifetime win in as many meetings over McGill for Northeastern, an NCAA Div. 1 school from Boston, which previously defeated the Redmen 87-73 in 2008. They jumped into a 17-8 lead after the opening stanza and led 36-27 at the half before McGill mounted a furious comeback, narrowing the gap to 58-57 after three quarters. The Redmen outscored the Huskies 30-22 in that period, buttressed by five three-pointers.

McGill went ahead 59-58 early in the final stanza before Northeastern rallied with an 18-0 run to put the game out of reach at 76-59 with just over four minutes remaining.

"We got down early and brought it back to go up by one," said David DeAveiro, in his third season as head coach at McGill, who fielded a lineup with only 11 players, including four freshmen, six sophomores and one senior. "Then they went on that long run because we got away from the things that put us back in the game. It was a lesson learned. Our rookies had a chance to compete and our second-year kids got a chance to play, so overall, I'm pretty pleased considering it was our first game."

First-year point-guard Adrian Hynes-Guery, a 6-foot-3, 185-pound native of Montreal who is an NCAA transfer out of American International College, contributed 13 points with four rebounds, four assists, one block and a steal. He saw 30 minutes of court time, the second-highest total in the game, before taking an extended breather in the final quarter after accumulating four fouls.

"I thought Adrian tried to do too much in the first half but he got comfortable in the second half," said DeAveiro.  "He did a good job for the most part but I would like to see him take a little more leadership, be a little more vocal on the floor."

In a balanced attack, every Northeastern player found both the scoring and rebounding columns. It was the second time in three games that every NU player scored as the Huskies improved to 3-0 on their current six-game road trip across the border, including 81-61 and 82-77 victories at Bishop's and Laval, respectively.

"Obviously we've got some things to work on but I was pleased with our progress today and it was great competition for us," said Bill Coen, in his seventh season as head coach of the Huskies.

"McGill made a great run at us and you got to expect that if you are... playing on the road. That the home team is going to make a run at you. I was proud of our guys the way we were able to withstand that run and come back with a run of our own to push the game to our favour."

The Huskies now head to Ottawa, where they will play the Gee-Gees on Monday, Laurentian (Tuesday) and Carleton (Wednesday). They close out their seven-day tour in Kingston against Queen's on Friday.

McGill gets a day off to watch and prepare for the University of Nevada Las Vegas Runnin' Rebels, who visit the Redmen on Tuesday with a 7 p.m. tip-off. However, UNLV arrives in Montreal on Monday to play the Laval Rouge et Or, at Love Competition Hall (7 p.m.).

REDMEN RAP:  McGill was missing four key veterans in their lineup, including 6-foot-10 centre Nicholas Yantzi and 6-foot-7 centre Tristan Renaud-Tremblay, along with guards Simon Bibeau and Winn Clark. Yantzi suffered a sprained ankle on the first day of training camp, while Renaud-Tremblay and Bibeau are still rehabbing from injuries suffered last season. Clark, a starter who was a healthy scratch, is expected to suit up against UNLV... After this week, the Redmen have one more exhibition scheduled against an NCAA squad. They play Central Florida on Nov. 5 in Orlando... McGill is 4-22 since they began scheduling preseason contests American college teams eight years ago... Last season, they posted a 2-5 record, including wins over New Hampshire (77-74) and Niagara (78-71).