NCAA hoops squad from Las Vegas cashes in on Redmen 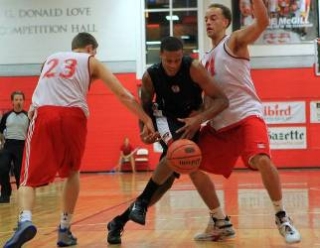 MONTREAL -- Adrian Hynes-Guery of Montreal scored a game-high 18 points for McGill but it was insufficient as the University of Nevada at Las Vegas men's basketball team won its fourth straight game in Canada, 74-59, against the Redmen before more than 300 at Love Competition Hall, Tuesday.

The game was the last of four exhibition contests for the Runnin' Rebels during their Canada trip. UNLV led 16-12 after the opening quarter, 39-31 at halftime and 56-44 after three stanzas. The difference-maker on the scoreboard was at the foul-line, where UNLV went 21-for-27, while McGill replied on 10-of-12.

Hynes-Guery played a game-high 36 minutes in sauna-like conditions but also committed a game-high eight turnovers. The first-year transfer from American International University, was 7-for-18 from the floor and made three of four free-throws. He was also credited with four rebounds and a steal.

Rodrigo Imperador, a 6-foot-5, 230-pound sophomore from Brazil, was McGill's only other player in double figures with 13 points, going 5-for-13 from the field, including a 3-of-7 effort from three-point range.

Anthony Marshall scored 17 points for the Runnin' Rebels, who have qualified for the NCAA tournament in five of the last six years. Teammates Justin Hawkins added 12 and Savon Goodman had 11.

"I was extremely pleased with the way we played tonight," said Redmen head coach Dave DeAveiro. "We played competitively for four quarters, not one, not two but the entire game. That's a great sign for our kids. That's something that we want them to do, regardless of the score, just to play hard to the very end."

Leading 39-31 at the half, UNLV started the third quarter with a 12-2 run to take a 51-33 lead with 3:56 to go in the period. The Redmen came back with an 11-3 run as back-to-back three-pointers by Imperador trimmed the Runnin' Rebels' lead to 10 points at 54-44. McGill was unable to get any closer than nine points the rest of the way.

"The Redmen are very well-coached and run their office extremely well," said Dave Rice, in his second season as head coach at UNLV. "When we made a mistake on defence they made us pay. I was impressed with their aggressiveness and execution. It was a great challenge for us and a great experience here."

With three starters out to injury -- Simon Bibeau (6-foot-3), Tristan Renaud-Tremblay (6-7) and Nicholas Yantzi (6-10) -- DeAveiro dressed only 10 players for the second straight contest and nine of them registered points. Rounding out the scoring for McGill was rookie Christian McCue (8), sophomores Aleksandar Mitrovic (6), Vincent Dufort (4) and Nathan Joyal (3). Seniors Winn Clark and Nicolas Langley had two points apiece, with Clark pulling down a team-high six boards and Langley grabbed five.

The Redmen now enjoy a five-week layoff before playing Queen's in an exhibition affair at Smiths Falls, Ont., on Sept. 28. Their next home-court appearance will be at the Redbird Classic tournament, Oct. 19-21, when they play Laurier, Trinity Western and Ottawa. UNLV also gets an extended vacation before they play next, against Dixie State on Nov. 7.

REDMEN RAP: McGill, which dropped to 0-2 against NCAA competition this season, owns a 17-49 record against NCAA Div. 1 schools dating back to 1968-69. They have one more game against an American opponent scheduled this season and will play at Central Florida in Orlando, Nov. 5.

(with files from UNLV's Andy Grossman)