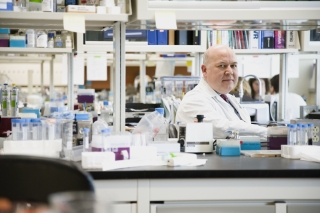 New immune-suppressing treatment forces the disease into remission in mice

A new experimental treatment for multiple sclerosis (MS) completely reverses the devastating autoimmune disorder in mice, and might work exactly the same way in humans, say researchers at the Jewish General Hospital Lady Davis Institute for Medical Research and McGill University in Montreal.

MS is an autoimmune disease in which the body's own immune response attacks the central nervous system, almost as if the body had become allergic to itself, leading to progressive physical and cognitive disability.

The new treatment, appropriately named GIFT15, puts MS into remission by suppressing the immune response. This means it might also be effective against other autoimmune disorders like Crohn’s disease, lupus and arthritis, the researchers said, and could theoretically also control immune responses in organ transplant patients. Moreover, unlike earlier immune-supppressing therapies which rely on chemical pharamaceuticals, this approach is a personalized form of cellular therapy which utilizes the body’s own cells to suppress immunity in a much more targeted way.

GIFT15 was discovered by a team led by Dr. Jacques Galipeau of the JGH Lady Davis Institute and McGill’s Faculty of Medicine. The results were published August 9 in the prestigious journal Nature Medicine.

GIFT15 is composed of two proteins, GSM-CSF and interleukin-15, fused together artificially in the lab. Under normal circumstances, the individual proteins usually act to stimulate the immune system, but in their fused form, the equation reverses itself.

“You know those mythical animals that have the head of an eagle and the body of a lion? They’re called chimeras. In a lyrical sense, that’s what we’ve created,” said Galipeau, a world-renowned expert in cell regeneration affiliated with the Segal Cancer Centre at the Jewish General and McGill’s Centre for Translational Research. “GIFT15 is a new protein hormone composed of two distinct proteins, and when they’re stuck together they lead to a completely unexpected biological effect.”

This effect, explained Galipeau, converts B-cells -- a common form of white blood cell normally involved in immune response -- into powerful immune-suppressive cells. Unlike their better-known cousins, T-cells, naturally-occurring immune-suppressing B-cells are almost unknown in nature and the notion of using them to control immunity is very new.

“GIFT15 can take your normal, run-of-the-mill B-cells and convert them -- in a Superman or Jekyll -Hyde sort of way -- into these super-powerful B-regulatory cells,” Galipeau explained. “We can do that in a petri dish. We took normal B-cells from mice, and sprinkled GIFT15 on them, which led to this Jekyll and Hyde effect.

“And when we gave them back intravenously to mice ill with multiple sclerosis, the disease went away.”

MS must be caught in its earliest stages, Galipeau cautioned, and clinical studies are needed to test the treatment’s efficacy and safety in humans. No significant side-effects showed up in the mice, he said, and the treatment was fully effective with a single dose.

“It’s easy to collect B-cells from a patient,” he added. “It’s just like donating blood. We purify them in the lab, treat them with GIFT15 in a petri dish, and give them back to the patient. That’s what we did in mice, and that’s what we believe we could do in people. It would be very easy to take the next step, it’s just a question of finding the financial resources and partnerships to make this a reality.”