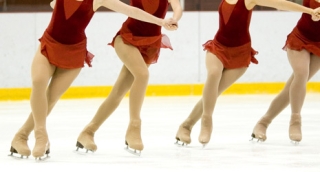 TORONTO – Freshman Catherine De Vries of Burlington, Ont., and the duo of Sarah Falk and Alexa Gavaga came away with bronze medal finishes for McGill at the 2009 OUA figure skating championships, held at Varsity Arena, Feb. 18-19.

De Vries, an arts major, was third in open solo dance. Falk, a freshman from Vancouver, B.C., and Gavago, a sophomore from Anola, Man., teamed up to reach the podium in the intermediate similar pairs.

Guelph dethroned the defending champions from the University of Western Ontario to capture the league title with 93 points. Queen’s was second with 87, followed by Western (64), Toronto (50), Waterloo (39), Laurier (40), Ryerson (35) and McGill (45).

“Although we did not succeed as much as we would have liked there were some major accomplishments,” said Ciara Ball, co-president of the McGill club. “The biggest one being the sixth-place finish in the synchronized skating, an event in which McGill has traditionally been in last place. After all the hard work and dedication put in by the team, it was a major accomplishment for us.”

The final event of the season is the annual McGill figure-skating showcase, scheduled for March 14 at McConnell Arena.

The Gryphons led from start to finish in the two-day event, capturing only the OUA team title for the first time since 1993-94.

Rhonda McKnight of Queen’s, who guided her squad to a surprising second-place finish, was named OUA coach of the year.